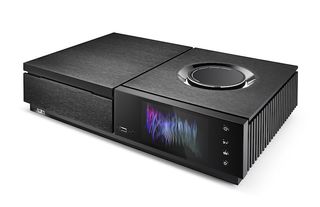 It's the norm in hi-fi land for products to get upgraded every year, with a nip here and a tuck there. Often these revisions are quite subtle, but not in this instance.

Naim has undertaken a root and branch revamp of its complete Uniti range from the ground up. There are currently five models - the original Uniti was launched in 2009 - but that will now be four, with no direct replacement for the UnitiLite.

There's a new industrial design, and regular readers will note the adoption of the stylish rotary dial on the top of the units, taken from the hugely successful Naim Mu-so and Mu-so Qb range. The casework is new too, but retains that familiar - and, in our eyes, classy - signature Naim look and finish.

Another key improvement is the large, full colour LCD display on the front panel of the players which displays menus, album artwork and track details.

First to launch in November is the £1800 Uniti Core, with built-in CD ripper and configurable hard drive. It replaces the UnitiServe and can store up to 100,000 tracks for playback through a network-connected player.

Next comes the £1750 Uniti Atom streaming music player, with 40W per channel Class A/B amplification (into 8 Ohms). The Atom also enables you to store up to 20,000 tracks on a USB stick or external USB hard disc.

The Naim Uniti Star (pictured top) boosts the amplification to 70W per channel (again into 8 Ohms), costs £3300 in standard form, or £3150 with the optional DAB module. It comes with a built-in CD-ROM drive for playing CDs or copying them to its internal storage.

And topping the new line-up is the £4100 Uniti Nova, delivering a solid 80W per channel into 8 Ohms.

A team of 25 engineers has spent the last three years developing a new eight-layer streaming board. The Uniti Atom, Star and Nova also feature a new fourth-generation, 40-bit SHARC DSP processor (the ADSP 21489 for the technical among you). All three Uniti players use Burr Brown DACs.

Naim says it has significantly improved the wi-fi performance (802.11b/g/n/ac), claiming it is five times faster than on the original Uniti platform and more stable. It supports 2.4 and 5GHz, and the wi-fi aerial is hidden in a slot in the heatsink between the fins.

For those who prefer a wired network connection, there is of course an ethernet port.

Among the new tricks the revised Uniti range has up its sleeve is a party room mode so the same music can be streamed in up to five rooms, including from analogue sources such as a turntable, or you can play different music in each of the zones.

HDMI ARC (audio return channel) connectivity is offered as standard on the Unit Star and Nova, and as a £100 cost option on the Atom (from early 2017), should you want to connect your TV.

As for storing your music collection, there are a number of options. While the Uniti Star has a built-in CD-ROM drive for ripping and playback, the Atom and Nova offer the option of plugging in an external USB CD-ROM drive and using that to rip to an external hard drive connected via the other USB socket. The Star and Nova have the added benefit of a SD card slot.

Control is via either the bi-directional, RF remote control or the Naim Uniti iOS or Android app. The RF remote has NFC-style pairing with the unit you want to control, and a claimed battery life of one year.

A digitally controlled analogue volume ring, first developed for the Naim Statement, sits on the top of the three players and also houses the Bluetooth antenna.

To hook up other sources, you get two optical digital inputs (up to 24-bit/96kHz), one or two coaxial inputs (up to 24-bit/192kHz) depending on the model, one set of analogue RCA ins (two on the Nova) and two USB Type A sockets (front and rear). The Star and Nova are also equipped with a single BNC input and HDMI ARC as standard. Headphone users get the benefit of a 3.5mm jack with an upgraded headphone amp.

The complete new Naim Uniti range will make its UK debut at the Indulgence Show in London on 13th-16th October, and will also appear at the Son & Image Show in Paris and Rocky Mountain Audio Show in Denver USA this month.

Sales of the Uniti Core are due to start in early November. The Uniti Atom will follow at the end of November, and the Uniti Star and Nova will be available in January and February 2017.

We have requested review samples and look forward to testing the new Uniti range as soon as we receive them.