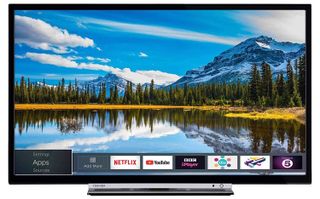 A 13 per cent discount means the Toshiba 32LL3A63DB is now the cheapest we've ever seen it. Here's what you need to know about this bargain deal...

Toshiba 32LL3A63DB 32-inch HD Smart TV £199 at Amazon
This cheap small TV offers value for money and impressive smart features. There's Netflix and BBC iPlayer, as well as Alexa voice controls (via an Echo speaker), and an optical port to plug in a soundbar.View Deal

Part of Toshiba's 2019 TV line-up, the 32LL3A63DB comes with built-in Freeview HD and wi-fi, so you'll have Netflix, Amazon, BBC iPlayer and the other major catch-up services at your fingertips.

There's plenty of smart features to get excited about, too. You can ditch the traditional remote and control the set via your phone or tablet, or use Alexa voice control (via an Amazon Echo device). You also get screen mirroring via Miracast, which lets you watch what's on your mobile or tablet, on the big screen – wirelessly.

Sure, the panel delivers Full HD rather than 4K resolution, but given it's a smaller size, there should be more than enough pixels to deliver a decent-quality 1080p HD image.

We certainly wouldn't recommend buying any old sub-£200 TV; there are a fair number of duds online. But given Toshiba's decent TV track record, this feature-packed 2019 set offers spectacular value for money (particularly for those already invested in the Amazon Alexa eco-system).

View this Toshiba deal on Amazon