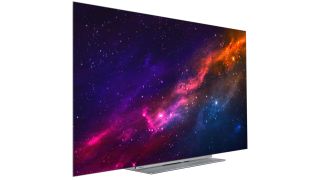 The TV market is dominated by a handful of big players: LG, Samsung, Sony, Panasonic and Philips. But if you're after a real bargain TV, you might be better off with a brand like Toshiba.

It has trod a rocky road in recent times, having been a key player around the launch of HD TVs, and it might not have the clout of a bigger name like an LG or a Samsung but the Japanese giant makes some of Amazon's best-selling TVs.

It certainly has something to prove, but are its TVs any good? And should you consider a Toshiba TV deal if you spot a bargain? Read on and we'll provide all the expert advice you need to make a sound decision.

Should I buy a Toshiba TV? Which are the best Toshiba TVs?

The good news? We reviewed the Toshiba 49U7763DB, a budget 4K TV, and we were impressed with what we saw. It delivered a natural, detailed picture, an easy-to-use interface, and access to Netflix and YouTube. A solid four-star TV. There aren't many still knocking around the internet, but it sets a decent precedent nevertheless.

While the Toshiba 55UL7A63DB didn't receive a glowing review, the slighter cheaper Toshiba UL5A63DB looks like where the value lies for a 4K HDR TV from this manufacturer. These LED TVs come in 43in, 49in and 55in sizes.

Again, there’s access to all the smart TV favourites (YouTube, Netflix, iPlayer, Prime Video) and the TV is Alexa-compatible which means that you can voice control it via an existing Echo device or the optional extra of a far-field mic. HDR comes in the form of Dolby Vision support and the TV speakers have been tuned by Onkyo.

Cheap, small Toshiba TVs have proved less impressive. The Toshiba 32D3454DB was less of a hit, receiving a three-star verdict. The 32-inch TV comes with a built-in DVD player, access to Netflix, YouTube and more, two HDMI inputs, and all for a bargain price.

We were underwhelmed with the picture performance, however, as it struggled to deliver good colours. The sound isn't great with busy action scenes, either, though you'll be OK for dialogue-driven TV shows.

Want an alternative? Amazon is now offering the Toshiba 32D3863DB as the closest replacement if you want a cheap TV with DVD player.

Should I buy a Toshiba OLED TV?

It's not all cheap Toshiba TVs, however. The brand now offers 4K and even two flagship OLED TVs. Toshiba, in line with companies such as Philips, will use OLED panels from LG Display, the sister company of LG. There's no reason therefore that Toshiba OLED TVs can't deliver the deep blacks and bright colours we love so much about the best OLED TVs.

The two Toshiba OLED TVs, the Toshiba 55X9863DB and the 65X9863DB, crucially support HDR video, Dolby Vision and HDMI 2.0. They have four HDMI inputs, plus three USB connections, work with Amazon Alexa, and offer Sound by Onkyo speakers. With many stockists already selling at below their original price, this could be a very tempting TV deal.

We wouldn't be put off should an alluring Toshiba TV deal come along. Check for feature support, especially on cheaper models, as things such as HDR and 4K iPlayer aren't a given, but otherwise there's a fair chance they will offer decent value.

The Toshiba 4K OLEDs are well worth investigating if they are reduced, too, though we'd suggest for the ultimate performance, the very best LG OLED TVs may prove capable of better pictures.