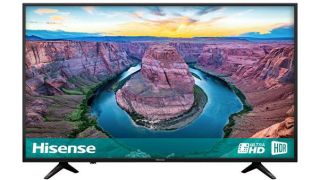 If you're after a bargain TV, Hisense TVs are likely to appear in your search. Delivering more affordable options than those offered by the Big Players (LG, Sony, Samsung, Philips and Panasonic), Hisense TVs certainly look like good value on paper.

What was once something of an also-ran brand, certainly in the UK and America, Hisense has since made big moves in the past year or so - it was an official sponsor of the 2018 FIFA World Cup and is lined up to sponsor the Euro 2020 tournament too.

The 2020 Hisense TV line-up is well worth a look. It includes the Hisense 65H9F, one of two ULED Quantum Dot models and the Hisense 65H8F which is on special buy below. There's also a big bet, from the Chinese company, on laser TV.

It may still have some catching up to do to compete with the reputation of its peers, but Hisense still takes up a fair amount of real estate on Amazon in both the UK and US, and is often a go-to for attractively priced 4K TVs, regardless of any deals. And when the deals do strike, Hisense sets are usually included, so you could bag yourself a stone-cold bargain.

But are they worth a look in the first place? Or would even a low-cost set be a waste of money? Let's find out.

Yes, if you’re looking for a 4K bargain

Those on a limited budget looking for a 4K TV bargain should consider it - as long as expectations are managed. You probably shouldn’t expect the same picture and usability sophistication of (albeit probably pricier) LG, Sony, Samsung or Panasonic TVs.

In our experience, Hisense has scored average to good, with the last big-screen set we reviewed, the 2019 H55O8BUK OLED, getting four stars and a pat on the back for its simple operating system, inclusion of most major apps and its sharp, detailed picture. This Hisense OLED was only let down slightly by weak motion processing and a comparative lack of detail.

Right at the other end of the market, however, with a few inches less is the five-star Hisense R50B7120UK Roku TV which is available in a few different sizes. It's one of the very best budget TVs around right now and also comes with the benefit of Roku's excellent smart platform.

At this super-low price, you don't get all the nuance of a mid-range or flagship set but there's plenty of punch with lots of colour and dynamism and a host of excellent features. It's a very useable, excellent value proposition.

…or a small TV

While Hisense is great for getting a big screen at a cheap price tag, its slightly smaller TVs offer great value too. Previously we have tested the 43in H43AE6100UK, dubbing it "one of the cheapest, most cheerful 4K TVs around". High praise indeed...

HDR performance once again falls down compared to pricier sets, plus it suffers from weak blacks and tinny sound. But with an overall balanced, detailed picture and great feature set, it still feels like a bit of a bargain.

What about the current Hisense 4K TV deals?

Hisense TVs aren't pricey to begin with, so when it comes to sale time, they can be very attractively priced indeed. Here are some of the best deals around right now in both the UK and US.

43in Hisense H43B7100UK 4K TV £299 at Amazon
This Freeview Play-loaded TV comes in a few sizes but the big value is at 43 inches. It's HDR-enabled and has all the basic catch-up apps. If you need a set more fully-featured then go for the Roku TV above.View Deal

50in Hisense 50R7E 4K TV with Roku $251 at Best Buy
For $250, this Roku TV gives you access to the likes of Netflix, YouTube and Hulu Plus, as well as over 4,000 other streaming channels. It certainly sounds like a great deal, and the 4.6/5 rating at Best Buy goes some way towards backing that up.View Deal

55in Hisense 55R7E Roku TV 4K HDR $270 at Best Buy
Pick up a big screen TV with one of the smartest platforms around for under $300. There's a 2 x 10W speaker system, 3 x HDMI and access to just about any app you need. If it's anything like the R7 we tested in the UK, then this is a killer TV.View Deal

Hisense 55H8F 55in 4K TV with Android $425 at Best Buy
With premium ULED panel technology, Dolby Vision HDR support, and Android's smart platform with Google Assistant voice control, this is a step-up over the models above. It's a well-rated TV with a hugely attractive discount.View Deal

Hisense 65H8G 65in 4K Quantum LED TV $800 at Walmart
The H8G is a 4K Quantum ULED capable of up to 90 local dimming zones and 700-nits peak brightness. Part of the 2020 Hisense line-up, it's Dolby Vision-enabled it also calls on the company's 'HI-View Engine', Google Assistant and a Game Mode.
View Deal

If you can find a hefty discount, a Hisense TV makes a lot of sense. With 4K Hisense TVs pretty cheap already, any discount could have you picking one up for as little as a couple of hundred quid, and at a pretty decent screen size too. Not many TV brands are reaching those prices, that’s for sure.

All of Hisense TVs are built on the Vidaa smart TV platform or Roku TV, offer Amazon Prime Video, Netflix and YouTube, and feature at least two HDMI inputs compatible with 4K/60fps. So, they're not short on the necessary tech or features, either.

The Roku TV Hisense TVs are particularly good and we're keeping a close eye on ther 2020 ULED models too.

Based on our more recent reviews, if you're on more of a budget than the big-name brands will allow, having a Hisense TV on your shortlist might not be a bad idea at all.