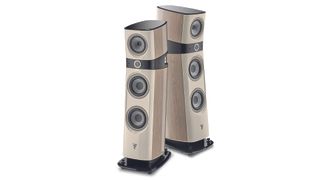 Kickstarting a week of product announcements in celebration of its 40th anniversary, Focal has revealed that its high-end Sopra No.2, Sopra No.3, Scala Utopia Evo and Maestro Utopia Evo speakers are getting the wooden treatment.

Ahead of the High End Munich Show, which commences on Thursday and is where Focal is expected to launch a ’40 year’ anniversary range of products spanning the home, in-car and professional studios markets, the French company has announced special edition wood finishes for it two most eminent speaker ranges. And, as we think you'll agree, they look rather lovely.

The finish application is the handiwork of Focal’s cabinet-makers in its Ébénisterie Bourgogne workshop, with each piece of wood uniquely treated.

Focal has chosen two high-gloss oak finishes for the two Sopra models: Light Oak and Dark Oak. With the former, light oak side panels match a lightly-coloured baffle, while with the latter, dark oak paneling aims to complement a darker-hued baffle.

Meanwhile, the 2017-launched Scala Utopia Evo and Maestro Utopia Evo speakers in the flagship Utopia III Evo range have been clad in a tawny-looking French noyer that heralds from a one-hundred-year-old tree from the Ain region. Now there’s a story for a future owner!

Again, these are glossy varnishes. And unsurprisingly there are limited quantities of the exclusive noyer-finished speakers.

The wood-finished editions will go on sale from June. Prices are tbc, however we expect them to attract over a premium over the standard finishes.

Moon introduces 860A v2 power amp ahead of Munich debut