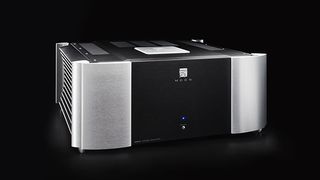 Simaudio has revealed the latest MOON power amplifier, the 860A v2.

As its name gives away, it is the second-generation version (and replacement) of the existing 860A, which sits in the middle of the brand’s power amp line-up.

Its balanced dual-mono design, which is now bridgeable by switch, utilises 225 watts per channel (at 8 ohms) of Class A amplification. Simaudio’s Lynx technology works to eliminate feedback and intermodulation distortion, while the purpose of the self-diagnostic Musical Precision system is to detect both over-heating and the presence of DC in the input signal.

Moon claims the 860A v2 outperforms both the 860A and the 870A, and that a mono bridged pairing exceeds the performance of the 880M, too. Therefore, the 860A v2 acts as a replacement for all three models, condensing Moon's power amp range to six models, and leaving the 860A v2 to sit directly beneath the MC-8 multi-channel amp.