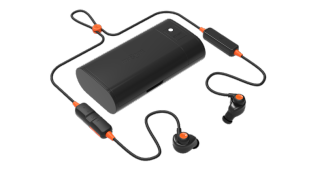 In-ear headphones are rarely the most comfortable, and while some companies are looking into making custom-fit headphones, Dog & Bone has taken a more unusual approach.

The company's 'Earmade' Bluetooth headphones come with a heating dock. Place the buds in the dock for two minutes, then fit the moldable component into your ear and the earbuds will set to your shape.

According to company co-founder Maria Ranchod, it's a "safe and streamlined process that is so simple, my eight-year-old could create earbuds on her own".

The headphones themselves are water- and sweat-resistant, and contain an 80mAh battery that lasts for six hours - rechargable via microUSB. There's also playback and call functionality via the remote on the cable.