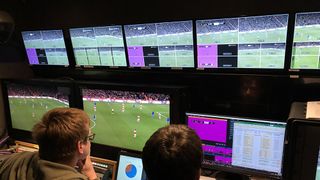 The collaborative effort saw the UEFA Europa League match between Arsenal and Olympiacos broadcast live in 8K and HDR10+ from the the Emirates Stadium, with a bespoke BT Sport 8K broadcast truck just outside the stadium delivering the picture to a 82in Samsung Q950R QLED 8K TV (2019) within one of the hospitality suites.

We attended the momentous occasion and are pleased to report that... it worked! Even more exciting was the suggestion that we could start seeing live 8K HDR football broadcasts in people's homes as early as next season. The implication was that an 8K-supporting BT Sport app could soon arrive on Samsung 8K TVs for subscribers of the broadcaster's Ultimate service tier (which already offers 4K, HDR and Dolby Atmos broadcasts) to watch.

A Samsung representative said that the first wave of Samsung 8K TVs from 2018 would be capable of playing the streams, too.

The internet speed demand would be around 70mbps, though – above the average speed in UK households.

8K is now being regularly broadcast in Japan