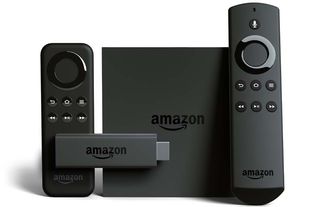 The new Amazon Fire TV box claims to be more powerful and faster than its predecessor, while also promising better wi-fi performance.

There's also now a microSD card slot for adding up to 128GB of storage to the 8GB storage inside, plus support for the new HEVC codec to improve 4K and 1080p HD video performance, and an HDMI 2.0 connection. Amazon has however removed the digital audio optical output.

But the headline-grabbing news is that support for 4K Ultra HD video, with Amazon boasting that its new Fire TV box will deliver "more 4K Ultra HD movies than any other streaming player".

Amazon Instant Video and Netflix are on board, both of which offer a growing selection of films and TV shows in 4K.

As well as Amazon and Netflix content, the box supports apps including BBC iPlayer, Demand 5, Sky News, Spotify, YouTube and more. Alongside 4K video, Dolby audio is also on board.

The new Fire TV 4K box will go on sale for £80 and is available to pre-order now.

Apple may have given plenty of time to launching its new Apple TV at the Apple event this week but the lack of 4K support was something of a let down (not to mention the removal of the optical audio output). Now Amazon has stepped into the breach.

The existing Fire TV majors on Amazon's own content, so it makes sense for the new box to support the 4K video on Amazon Instant Video. Amazon has also adopted HDR video on some of its shows, showing the company's eagerness to adopt the latest video technology.

Also upgraded is the Amazon Fire TV Stick, which now comes with Voice Remote, a voice-controlled remote control which can search content by movie, TV show, actor, director, or genre.

The new Fire TV Stick with Voice Remote is also available to pre-order now and costs £45.

MORE: 4K content: where to watch 4K online and on TV