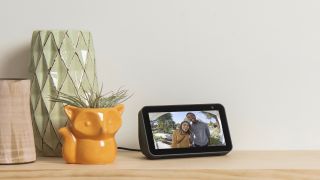 Costing £79.99/$89.99, the Echo Show 5 is considerably less than the Echo Spot, and slightly cheaper than the screen-less Amazon Echo smart speaker.

It's smaller than the standard Echo Show, and like every other Echo devices it features Alexa - Amazon's voice-activated personal assistant - for hands-free control.

Amazon is bigging up the smart speaker's audio capabilities, describing it as perfect for playlists. Though its sole 4-watt speaker isn't as powerful as the Echo Show's two 10-watt drivers, we're reserving judgement until we've had one in our testing labs. Because it has a screen, it can show lyrics via Amazon Music. It's also compatible with Spotify, Deezer, TuneIn and Apple Music.

Its 5.5in screen is about the size of a premium smartphone, though with a resolution of 960 x 480 you shouldn't expect it to rival a proper TV (or even in a flagship phone!) in terms of picture quality. You can control your smart home devices using a new dashboard that's coming to all Echo Show devices, and manage them by group.

Alexa is also getting new customisable nighttime and wake-up routines, the latter of which brightens the screen to mimic sunrise before your alarm sounds.

A built-in camera shutter means you can cover the lens and know that your privacy is guaranteed.

The Amazon Echo Show 5 is available in Charcoal or Sandstone finishes, with pre-orders open now ahead of shipping next month.