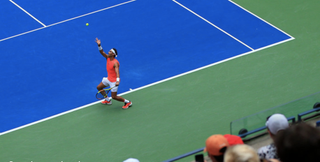 Rafael Nadal fought hard to beat Argentinian Diego Schwatzman, setting up a semi-final tie against Matteo Berrettini to remain the tournament favourite. Were he to go all the way, it'd be Nadal's 19th Grand Slam, bringing him within one of Roger Federer's incredible record.

To do that, though, he will have to beat his Italian semi-final opponent and then either Grigor Dimitrov or Daniil Medvedev, who make up the rest of the last four.

There's plenty of excitement left in the women's tournament as well, with Serena Williams facing world number five Elina Svitolina, and Belinda Bencic and Bianca Andreescu battling to face the winner of that tie in the final.

And that's only the singles! We're at the same stage with the men's, women's and mixed doubles games, while the stars of tomorrow are in action in the US Open Juniors.

If you're anything like the What Hi-Fi? team, you'll be desperate to stay on top of the action. Don't worry, you've come to the right place. Here's all the information on when, where and how to watch the US Open tennis action, whether you want to live stream online or enjoy at home on your TV.

The first round of the US Open began on Monday 26th August 2019 and the tournament is scheduled to conclude on Sunday 8th September 2019 with the Women’s Doubles Final and the Men’s Singles Final.

The venue for the US Open is the USTA Billie Jean King National Tennis Center in New York, USA.

The Flushing Meadows complex is home to 22 tennis courts. Last year, the new Louis Armstrong Stadium was opened for the US Open and, with a maximum capacity of 14,000 seats, it's the second largest venue in the complex.

If you're planning on being in town, a few tickets for either the 11am (afternoon session) or 7pm (evening session) are still available, from US Open official ticketing partner, Ticketmaster.

For the rest of us, we'll need our TVs, laptops, tablets or phones to get a piece of the action.

For your diary, here's an order of play cheat-sheet:

How to watch the US Open in the UK

Quick answer: Amazon Prime Video. Still have that Amazon Prime account you set up ahead of the 48-hour bargain bonanza known as Amazon Prime Day, back in July? You might want to hold onto it; your £7.99 per month guarantees exclusive live streaming of the US Open in the UK.

Amazon holds complete and total broadcasting rights to the US Open until 2023, and will even dip its toes into the Premier League market too, airing 20 games per season between 2019 and 2022.

New Amazon customers can get a 30-day free trial with full access to live US Open match coverage – as well as free one-day delivery on thousands of items across Amazon.

How to watch the US Open in the USA

Viewers in the US will be able to watch US Open coverage on ESPN. Matches can also be streamed through ESPN3 on the US Open website, and on ESPN+.

ESPN is presenting the 2019 US Open for the 11th consecutive year, and its fifth year as exclusive partner. ESPN's networks will showcase first-to-last-ball coverage throughout the tournament, with nearly 140 hours on TV on ESPN and ESPN2, and plans to offer an additional "digital grounds pass" for tennis fans, with more than 1,300 hours of coverage from all 16 courts, streaming live across ESPN3, ESPN+ and the ESPN App.

Additionally, ESPNEWS and ESPN+ will team up to deliver exclusive coverage of this year's qualifying tournament (from Monday 19th August to Friday 23rd August), as well as coverage of US Open Fan Week activities taking place around the grounds. ABC will also broadcast Arthur Ashe Kids' Day on Sunday 25th August.

The Tennis Channel will deliver daily US Open preview and highlight shows, too.

How to watch the US Open abroad using a VPN

Attempting to access either UK or US streams from abroad is an issue. These services know your location – yes, even if you're on a UK laptop, watching via your UK Amazon Prime Video account, just, you know, in another country. It's all based on your IP address, and unfortunately the services will automatically block your access.

Is there anything you can do? Why, yes! But you’ll need a Virtual Private Network (VPN) to help you out. A VPN creates a private connection between your device and the internet, such that the information passing back and forth is entirely encrypted, and the services and servers you’re accessing aren’t aware of what you’re doing.

VPNs are as handy for online banking as they are for trying to watch video content or access websites that people in your location aren't really supposed to do. So, whether you want to watch Roger Federer attempting to become the oldest Grand Slam winner in the Open era, enjoy another country’s Netflix library or just keep your browsing data private, they’re well worth investing in.

There are many VPN providers out there but, as always, some more secure and reliable than others. We’d suggest a paid-for service and would recommend the following:

Has a free 3 month trial (which should be long enough for all but the most outrageous of getaways) and brings VPN access to smart devices including the Amazon Fire TV Stick, TVs, laptops and both Android and iOS mobiles and tablets.

Once you’ve selected a provider, all you need do is sign in to your VPN service through whichever device you’d like to use, and get down to the serious business of watching tennis.

Troubleshooting advice: when prompted to select a server, you need to pick one which is based in the country whose content you’d like to access. Then navigate to the relevant video streaming app or website and you’re in. Aces!

And there we have it. With so many ways to tune in for free (or nearly free) there's no reason to miss a single moment of live tennis – who needs sleep, right?! We're sure it's going to be a belter of a tournament and we can't wait to see who will walk away from the last Major of the year with the spoils.