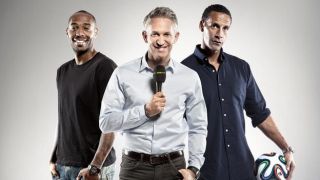 The World Cup, like the Olympic Games, is not just a major sporting event for fans – it's also a key event for the broadcast and technology firms involved in broadcasting the coverage.

The 2014 World Cup in Brazil has been the most accessible ever. With live TV, online coverage, on-demand highlights, catch-up TV apps, radio and more, all helping ensure we don't miss a kick. And there's just the World Cup Final left...

Here's how can you watch the final match in this summer's festival of football (if you're not in Rio with match tickets)? Whether you're in your living room or on the move, watching live or catching the highlights, here's our guide to watching all the drama as it unfolds in Brazil...

The World Cup is one of a number of sporting spectacles reserved for broadcast on free-to-air – or terrestrial – TV channels. That means Sky and BT Sport aren't allowed to gain the exclusive rights to the tournament. It must be shown live on terrestrial channels.

The World Cup Final will be shown live on BBC and ITV.

You can watch live coverage of Germany vs Argentina, Sunday 13 July, 7pm BST on BBC One, BBC One HD and the BBC Sport website.

The BBC has showed 31 live matches shown on TV and more than 160 hours of programming (50% more than in 2010), including highlights and match re-runs across BBC One, Two and Three, plus the respective HD channels.

The Beeb also offered a host of supplementary programmes and extensive News coverage, with a daily morning highlights programme on BBC Two (and in HD).

Meanwhile, ITV showed 34 live games in total across its main channel and ITV4, 20 from the group stages and the remaining 14 from the knockout phase.

Both the BBC and ITV are showing the World Cup final.

If you can't get to a TV or would rather listen to the action, the radio broadcasting rights were secured by the BBC and talkSPORT.

The BBC broadcast 24 days of live football on Radio 5 Live, while talkSPORT has "live commentary of every match", including the World Cup final.

talkSPORT also signed up with SportsYapper, a social media application that has been designed as a "social environment" for sports fans to discuss the latest news and results.

The app can be downloaded via iPhone, iPad, Android and desktop from the App Store and Google Play.

The partnership between talkSPORT and SportsYapper is a fine example of how this World Cup was the most interactive and accessible yet.

The BBC and ITV also made extensive use of their mobile and on demand platforms for extensive coverage of the 2014 World Cup.

One of the features unique to the BBC was the BBC World Cup Rewind, with some of the home nations' greatest World Cup matches will be replayed online and given "full live treatment".

The matches have all been available across four screens – PC, tablet, mobile and smart TV - and it's the same again for the final.

All BBC content is available to catch up on demand through BBC iPlayer – both from TV and radio, but also a "wealth of extensive content and interactive features" online from BBC Sport.

ITV has offered live streaming of the World Cup matches online via ITV Player on itv.com.

The website has been designed specifically in mind for mobile and tablet use, with the content including highlights of all 64 matches; in-game video clips; latest news; extra analysis; and live statistics as matches unfold.

The results of a survey published by YuMe has found that 63 per cent of people will watch World Cup highlights on their computer, with 23 per cent on smartphone and 25 per cent on tablet – so the BBC iPlayer, ITV Player and talkSPORT apps can expect some serious use this summer.

Even the England players were equipped with Samsung Galaxy S5s this summer for their brief World Cup experience, with the Korean manufacturer signing up with the Football Association as Official Consumer Electronics and Smartphone supplier.

MORE: England team to be kitted out with Samsung smartphones

Can we watch the World Cup in 4K?

Plenty of places have been billing the 2014 FIFA World Cup as 'the 4K World Cup'. Like us, for example.

And we did finally, thanks to Sony and Vue Cinemas, get to watch the World Cup in 4K at a screening in London.

Sony and FIFA have teamed up to film Ultra HD 4K TV coverage of the tournament. Three full fixtures will be produced in 4K, along with the Official 2014 FIFA World Cup Film. Looking out for that 4K footage coming to a Sony TV dealer near you and hopefully to our homes some time soon...

4K is marching to the final in the eyes of FIFA, but 3D was rather left at home. Last summer, BBC head of 3D Kim Shillinglaw told the Radio Times that the BBC would be taking a three-year break from 3D content – despite a reported increase in global sales of 3D TVs (though this most likely reflects the growing number of sets that simply offer 3D as a feature).

While as recently as March this year, FIFA told SVG Europe it had "yet to make a decision" on 3D for the tournament – and that was with just three months to go kick-off. And so it came to pass, with no 3D coverage of the 2014 World Cup.

It's a stark contrast from 2010, when Sony and FIFA championed the 3D production of 25 matches in the months leading up to the tournament.

In comparison with previous World Cups, the technological advances may not be as accessible as the advent of colour (for example). 3D is relegated to the subs bench and 4K is a wildcard pick yet to cut it at international level, but we'll have our seasoned performers raring to go.

So was this the World Cup where online and mobile shined? The expected to provide 50 per cent more coverage than it did in 2010, so while eyes focus on whether Ultra HD 4K comes to the party, it may be that mobile and online viewing were the real winners in 2014.