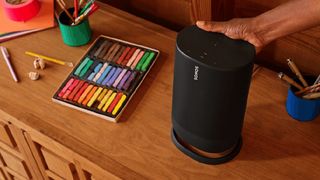 Sonos’ first-ever portable Bluetooth speaker is unsurprisingly stealing headlines ahead of its planned launch during IFA 2019 next month, with leaks coming through thick and fast. The first rumoured details of the new Sonos speaker arrived last week, and now thanks to a WinFuture report we have an alleged name as well as further images and specs.

The Sonos Move – a fitting name, we think you’ll agree – is the first of the brand’s devices to be battery powered and marry wi-fi with Bluetooth, allowing owners to stream music within a Sonos ecosystem as well as listen offline over Bluetooth away from the mains.

So what do we know (or think we know) so far? Apart from price, availability and the nitty-gritty tech specs, quite a lot actually. The report reveals the first official marketing images of the device, confirming its familiar Sonos One-like aesthetic. The Move is supposedly slightly larger than its sibling, however “should provide about a similar performance”.

Previous rumours suggested the Move would utilise a (hopefully included) base station for cable-free charging – and as you can see for yourself, it looks as though that will connect to the speaker via two connect points. It also appears the speaker can be charged directly via USB-C, while LEDs for displaying battery status will sit alongside the typical playback buttons.

There are buttons on the rear for switching between Bluetooth and wi-fi mode, too, as well as six microphones to facilitate voice control via Amazon Alexa or Google Assistant. Last but not least, the Move features a recessed grip for easier carrying.

All we need now are battery life figures, pricing and availability – all of which should be made clear during the Berlin-held launch events on Wednesday 4th and Thursday 5th September.