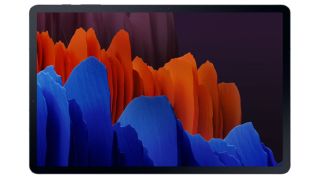 The Galaxy Tab S7 and flagship Tab S7+ both feature Super AMOLED displays and, according to Samsung, combine "the capability of a PC, the flexibility of a tablet, and the connectivity of a smartphone".

The Tab S7+ is also available in a 5G compatible variant and boasts HDR10+ support.

Both tablets feature a full metal design that's available in three new colours (Mystic Bronze, Mystic Black, as above, or Mystic Silver) and they do look slick – the S7+ is the slimmest tablet of its size currently on the market.

The Galaxy Tab S7 and Tab S7+ come with an upgraded S Pen and Samsung Notes (as featured on the Galaxy Note 20 series) to offer that promised PC-like experience. Samsung says you'll even be able to use either tablet as a second screen for your Microsoft Windows 10 PC later in the year.

With the Tab S7 and Tab S7+, three apps can be open and running simultaneously, so you could be chatting to a friend, watching a video on YouTube and sketching with the S Pen, all at the same time.

The overhauled and bundled S Pen is about to become your Tab's optimal companion, according to Samsung – it's even got its own little storage slot on the back of the tablet – thanks to three key drawing and note-taking apps, which come pre-loaded: Clip Studio Paint, Canva and Noteshelf10. You also get ad-free access to YouTube Premium for six months.

In the sonic department, there's Quad speaker sound by AKG and Dolby Atmos.

Ready for pricing availability? Both Samsung Galaxy tablets will be available from 21st August.

Preorder a new Tab S7 or S7+ from Samsung between 5th and 10th August (UK, Isle of Man and ROI residents), and you can also claim a Galaxy Gaming Bundle or Galaxy Book Case.

Samsung Galaxy Buds Live are wireless earbuds with a difference