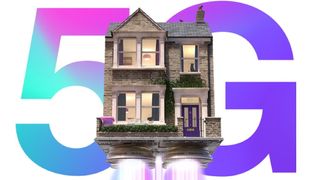 You can kiss goodbye to buffering – the 'superfast' 5G mobile internet has arrived in a host of cities and towns across the UK and US.

What's more, 5G is set to power a slew of new smart devices, from 5G phones to 5G TVs, 5G VR headsets and 5G gaming devices. It'll also mean that voice assistants such as Alexa will provide answers on the double.

With so much buzz around 5G, it's no surprise that everyone's talking about it. But what is 5G? How can you get it? And what 5G phones are available to buy? Read on and we'll explain how to get 5G in your life...

5G is the fifth generation of mobile internet connectivity. Eventually, it will replace 4G but, for now, 5G networks work in combination with 4G and 3G to provide the speediest possible connection.

You shouldn't have any trouble getting a stable connection in busy places such as music festivals, or at busy times such as New Year's Eve. Once enough 5G masts are peppered throughout the country, 'dead spots' will become a thing of the past.

As well as 5G smartphones, some networks offer 5G home internet. It comes over the air rather than through a telephone line, cable or dish, so it offers faster top speeds than broadband.

As Samsung recently predicted, the leap from 4K to 8K picture technology could be made smoother by 5G TVs.

Pixel-packed pictures aside, 5G is set to spread to everything from from cars to fridges. The idea being that, when everyone – and everything – is connected 24/7, 5G devices will help make our lives even smarter.

In the UK, EE and Vodafone offer similar estimates of speed. Vodafone says 5G will work at average speeds of 150-200Mbps, and peak speeds will reach 1Gbps. That means you'll be able to download a full HD film in around 3 minutes, compared to over 15 minutes on 4G. Pretty quick for a mobile network.

In the US, Verizon, which boasts one of the most advanced 5G networks, has demonstrated speeds of 600Mbps to 1GBbps.

Of course, speeds can vary according to the country, the type of 5G network and your proximity to a mast. So it's really a case of 'suck it and see'.

When will 5G launch in the UK?

EE was the first network to launch 5G in the UK. So far, it's switched on 5G in six cities including London, Edinburgh, Manchester and Birmingham. By the end of 2019, EE hopes to bring 5G to ten other cities: Glasgow, Newcastle, Liverpool, Leeds, Hull, Sheffield, Nottingham, Leicester, Coventry and Bristol.

Vodafone followed EE in July 2019, launching 5G in seven cities and eight towns. As of today, it offers 5G in 31 locations in the UK –stretching from Plymouth to Paisley. You can find a full list of 5G locations here.

Vodafone also claims to be the first of the UK networks to offer 5G roaming in Europe. Here's a list of all the places outside the UK you can get Vodafone 5G.

O2 launched its 5G network in December 2019, covering London, Belfast, Cardiff, Edinburgh, Leeds and Slough. By the end of the year, O2 aims to bring 5G to 'parts of' 20 towns and cities, before rolling out to a total of 50 by summer 2020. Use O2's coverage checker to see if 5G is available in your area.

If you're a Three customer, there's good news and bad. Three is yet to launch a 5G phone network, but it has launched 5G home broadband. More on that further down.

Should you buy a 5G phone now?

With 5G networks are expanding by the day, you might be considering splashing out on a 5G smartphone.

While you'll pay a premium, you should be able to hop on significantly faster data connections in most large towns and cities. However, with coverage still patchy, you won't always be able to reap the benefits.

5G home internet is arguably better proposition, since you'll be able to stream 4K films and TV shows via the likes of Netflix and Amazon Prime Video.

It really depends on coverage in your area. But as more people make the leap to 5G, that should improve.

Which 5G phones are available in the UK?

A raft of 5G smartphones were announced in 2019, and while some aren't available yet, buying a 5G phone is making more and more sense by the day.

The OnePlus 7 Pro 5G was the first 5G phone available in the UK, and is currently available on EE. The network offers a decent range of 5G phones including the dual-screen LG V50 ThinQ.

If you have deep pockets, you can pre-order the Samsung Galaxy Fold from EE. It costs £50 upfront plus a whopping £119 per month for EE's 5G Smart Plan, which includes a monthly data allowance of 120GB.

Vodafone offers a decent selection of 5G phones including Samsung models and the supersize Huawei Mate 20 X (5G), which totes a cinematic 7.2-inch OLED display. It'll set you back around £68 per month, plus £29 upfront.

Apple has yet jump on the 5G bandwagon but is expected to launch the first 5G iPhone in late 2020.

When will 5G home broadband launch in the UK?

Struggling with slow internet speeds? It might be worth ditching broadband for 5G. Three, Vodafone and EE all offer 5G home internet – but only in selected parts of the UK.

Three's 5G home broadband is in 25 locations including London and Edinburgh. It's currently available for £29 per month. Three says that, in certain parts of the UK, users of it 5G home internet can 'download a 4K movie in seconds'. See if it's available in your area here.

Vodafone's Gigacube turns 5G and 4G networks into wi-fi. It costs from £30 per month and you can plump for a rolling 30-day contract. Here's the coverage map.

EE's sells the HTC 5G Hub, which brings 5G to any wi-fi-enabled device. It's expensive, though: £100 upfront plus £50 per month. You can check EE's 5G coverage here.

When will 5G launch in the US?

Verizon was first to market with 5G. It launched its 5G network back in April 2019, promising ultra-fast speeds and ultra-low lag times.

According to our sister site TechRadar, 5G speeds have topped 1.4Gbps in Chicago. Pretty impressive, although coverage can be patchy.

AT&T was next out of the gates. It rolled out 5G in 19 US cities but, again, coverage is limited. You can find details of AT&T's 5G coverage here.

The third major US carrier to roll out 5G, T-Mobile, launched its network in December 2019. T-Mobile claims to offer more 5G coverage than its rivals, but it's far from 'nationwide'. You can see T-Mobile's 5G map here.

What 5G phones are available in the US?

Currently, Verizon offers one of the most advanced 5G networks and the widest selection of 5G handsets.

AT&T doesn't offer many 5G handsets besides the Samsung Galaxy Note 10+, which you can pre-order here.