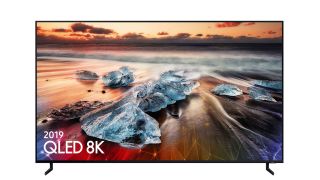 Samsung is backing a fast adoption of 8K TVs over the next few years – quicker than the move from HD to 4K – driven by super-fast 5G mobile networks that demand better screens and better quality video.

You may just be familiarising yourself with 4K TV but Samsung is positioning itself as the market-leader when it comes to 8K ahead of what the company expects to be a short and sweet move from 4K to 8K. The move from 4K to 8K was said to be "two years ahead" of the comparative move from HD to 4K, with Samsung saying the 7-year transition period to 8K begins... now. Perhaps no surprise considering the company already launched its 2nd-gen 8K QLED TVs earlier this year.

Speaking at this year's 8K Display Summit, which was sponsored by Samsung, Sonia Chen, director of display marketing at Samsung Electronics’ Device Solutions America, said: "With the rapid expansion of 5G wireless network technology, [the] 8K display market is expected to make great strides. In particular, it will receive the spotlight among the millennial generation who are familiar with fast internet speeds and high-quality image viewing."

Chen described 5G as a "mega trend" that would command displays with bigger screens, better picture quality and higher resolution. 65-inch 8K TVs are tipped to be the key screen size, as early adopters upgrade from the established 55-inch 4K sweet-spot. 42% of American households are predicted to have a 65in or bigger screen by 2021.

Chen said more than half of 55-inch TVs are now 4K resolution, and predicts 8K resolution 75-inch TVs will hit a similar market share by 2020. A fully-fledged 8K ecosystem, supported by compatible chips, cameras and content was said to be "ready", at least in terms of the all-important first step.

On the subject of 8K content, Chen pointed out the first test 8K broadcasts had already been carried out by NHK in Japan – with the next big test set to be 8K broadcasts of the 2020 Olympics – and predicted 8K streaming would come to big players such as Amazon and Netflix by 2020/21. That second content wave will then be followed by a third "mass market" wave, driven by 5G. Samsung was also keen to highlight the ability of its 8K AI upscaler when showing HD and 4K video on 8K panels, filling any 8K content gap (which is of course more like a glaring hole, right now).

And if you're thinking Samsung is getting ahead of itself... Chris Chinnock, the president of Insight Media and executive director of the 8K Association, would, predictably, disagree: "8K display technology is not a future technology – it is here today, and is available to viewers in Japan and other regions... the development of all technologies and cooperation in the industry is proceeding rapidly."

While we don't expect 8K to be mainstream any time soon, with 4K screens now established and a wealth of content to be found across 4K Blu-ray, Amazon, Netflix, YouTube and elsewhere, it's no surprise hardware and software companies will be looking for the next TV upgrade option to tempt early-adopters over the next couple of years.

But fear not, if you're only just getting used to enjoying 4K films and video, or are thinking about buying your first 4K TV, we think you can rest easy knowing that number of pixels isn't going out of fashion any time soon.