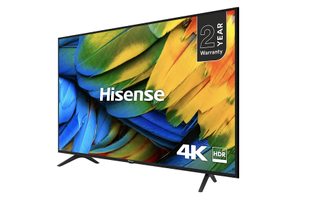 Thanks to Prime Day, two 43 inch Hisense 4K TVs are now on sale – but remember, deals are live for 48 hours and 48 hours only.

First up, we present this 43-inch Hisense H43AE6100UK 4K Smart TV, which gained four stars from this very publication last year. We found it to be one of the cheapest and most cheerful 4K TVs of 2018 when it came to the market – at £339.

We reviewed this Hisense 4K TV during a Black Friday sale, which made the set a whole £10 cheaper – but come on, this is Amazon Prime Day. We can do better. How does £249 sound? Correct, it's a 26 per cent saving – and that sounds very good indeed.

A four-star 4K that's now even cheaper (to make you even more cheerful) than before, with surprisingly good picture quality and plenty of connectivity options – including three HDMI ports. It handles the bread and butter of everyday watching for a newer, even-more-impressively low price.View Deal

Next, there's another 43-inch Hisense 4K TV, and it's a 2019 model. While we haven't put the Hisense H43B7100UK through its paces, it comes from reliable stock – and there's an HDR display, DTS Studio Sound and Freeview Play built-in. Down to just £255 from £399, the 36 per cent saving surely makes it a serious contender on anyone's Prime Day wishlist.

A 2019 Hisense 4K UHD, HDR TV with Freeview Play and DTS Studio Sound for 36% off? It's got to be worthy of your consideration. Yes, that's right, thanks to Prime Day it'll cost you less than a 2018 Hisense 4K 43-inch model. View Deal