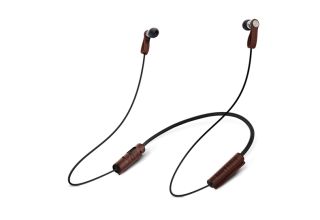 Wireless headphones are becoming more popular, but getting hi-res files into them is diffcult. Meters Music's new headphones, however, won't struggle with that. Its new Meters M-Ears Bluetooth use aptX HD Bluetooth to transfer audio at 24bit/48kHz.

The headphones have two 7mm drivers to push that music into your ears, and when you're not using them they clip around your neck using magnets on the back of their housings (similar to Beyerdynamic Byron BTAs or Beats X).

On the neckband of the headphones are three function keys for playback control, as well as a battery indicator. The Meters M-Ears are charged via MicroUSB, which can also be used as an audio input for wired use.

The headphones come in four colours - black, tan, red, and rose-gold - and will be available in December at £100. Just a shame there aren't any VU meters on them...

Michael Stipe says R.E.M. in Dolby Atmos is "breath-taking" - and we agree