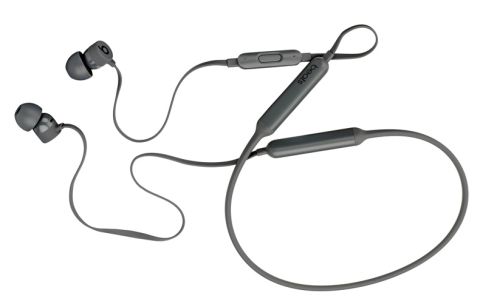 A fine Bluetooth performance, but the energetic sound lacks detail

As the most Apple-centric wireless headphones not made by Apple, the Beats X are aimed squarely at iPhone owners.

It’s all about the Apple W1 chip, which makes this pair slicker than your average Bluetooth headphone.

They’re easy to live with, and Bluetooth performance is almost faultless whether they end up connected to an iPhone or Android equivalent. But is there better sound quality to be had at the price?

Beats’ headphone design used to be all about aggressive lines and curves recognisable from the other end of a train carriage. That has changed.

The Beats X are still headphones you can clock in a crowd, but their look is intensely simple and clean.

Each part is colour-matched – either white, blue or black – and, aside from the small Beats logo on the back of each earpiece, they look like a wireless style headphone archetype.

Slim, light and simple, the Beats X are also comfortable and easy to wear. As the three-button remote sits on the cable rather than the neckband, the band itself barely needs to extend beyond your neck.

Like many of the more streetwise pairs of wireless earphones, the Beats X’s earpieces have magnets in the back of each earpiece, which means you can stick them together when not in use.

There are also optional silicone wings that attach to the earpieces for extra stability, although these are only necessary for sport use. The tips are pretty secure on their own.

So far, the Beats X seem like any other pair of premium Bluetooth earphones. However, they use a Lightning charger socket rather than a microUSB. The highlight, though, is the Apple W1 chip.

The W1 chip lets an iPhone identify and pair with these earphones far more quickly and easily than a normal Bluetooth set. Signal reliability with Android is excellent too.

The Beats X prove the amazing battery life of the Beats Solo 3 Wireless isn’t down to the W1 chipset, though. These headphones last for an average eight hours between charges. Fast charging offers a couple of hours’ use from a 15-minute charge.

Beats does not struggle to make headphones that sound fun. It has come a long way since its days of murky bass and veiled treble.

The Beats X are enjoyable, but are still a way off the best-sounding at the price. Their tone is full and chunky, with bass that has power but isn’t overblown to the extent it treads over the rest of the sound.

They’re rhythmically adept enough to keep beat-based music engaging, and the Beats X have plenty of energy to their delivery.

Compare them directly to headphones such as the Sennheiser Momentum In-ear Wireless or Bose SoundSport Wireless and you start to hear their limitations, though.

Detail of the midrange and treble is unremarkable. These aren’t earphones that dig deep into music, and are far better for casual rather than close listening.

The Beats X aren’t for people who want to get to know their music better. They're unable to deliver details that wouldn't be revealed by a portable speaker, for example.

However, as you’d expect from a Beats pair, they do not want for energy or enthusiasm.

Bluetooth earphones don’t get much easier to use than this, particularly for iPhone owners. Wireless performance is great, and they’re an easy fit.

Their sound is energetic and full, but it doesn’t have the finesse or detail of the best in this category.

Detail is limited, and shouty upper mids make them occasionally a little hard on the ear with no real compensation elsewhere.