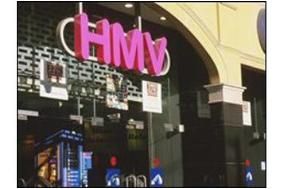 HMV is selling new shares to fund the expansion, which will include the acqusition of the Hammersmith Apollo in London, to be renamed the HMV Apollo.

Other venues joining the HMV stable include The Forum, Heaven, The Garage, Jazz Cafe, Edinburgh's Picture House, Birmingham's Institute and Moshulu in Aberdeen. They will be run under a new joint venture between HMV and MAMA Group.

And while the administrators of rival retailer Zavvi are closing another 18 stores, including the flagship store in London's Piccadilly, HMV is buying 14 Zavvi branches for around £2m.

The Zavvi stores it's buying are all profitable, says HMV, and are in locations where it doesn't currently have an outlet. They will be re-branded HMV.

HMV says sales in the five weeks to January 3rd were up by 2.9 per cent. Its top-selling DVDs over the Christmas period were Mamma Mia and The Dark Knight.