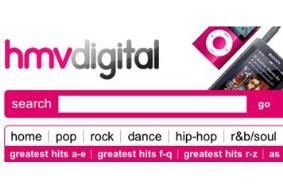 Boasting a catalogue of 10 million songs, the service, which has been in beta testing since March, allows users to automatically synchronise purchases with their iTunes library or Windows Media Player.

Downloads are available in MP3 320kbps format as opposed to the iTunes Store which sells AAC files at 256kbp (though don't take that as a given that this will mean better sound).

HMV will sell tracks for less than those on the iTunes Store as part of its initial launch campaign, with the top 40 singles currently on sale for 40p each.

The site is powered by 7digital, a digital media company in which HMV bought a 50% stake last year – read more on that in the original story below.

HMV customers in the UK and Canada will be able to access over six million high-quality MP3 tracks from all four major labels, plus video content via 7digital branded stores.

7digital will also create an enhanced e-book store for Waterstone's.

In addition, HMV customers will be able to access the 7digital Locker service, allowing the download of previously purchased content to any computer or mobile device.