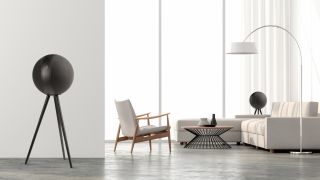 Teased back in May, Elipson's W35 wireless streaming speaker is finally here and available to buy.

The W35 marks the first time that the French audio brand has brought streaming to the hallmark spherical shape of its Planet speakers, and we’re at the official launch at the Paris AV Show 2019 about to get ears-on with it.

It may be a single speaker, but the Elipson W35 is split down the middle into left and right channel stereo hemispheres. Each comes fitted with a 2.5cm silk dome tweeter that is backed by a heat sink behind the magnet to keep the mechanism cool and consistent. Providing le boeuf is a single 16.5cm mid-range driver in each half with a large magnet and excursion to match. With a 350-watt amplifier sitting inside the 35cm diameter globe, we’re hoping for plenty of welly.

With built-in wi-fi connectivity, the W35 can be used as part of Elipson’s multi-room system, controllable by the Elipson app.

Inside that app you’ll find access to your favourite streaming services including Qobuz, Tidal, Deezer, Napster, TuneIn and it is, of course, both Spotify Connect and Amazon Alexa-compatible. That means access to millions of tracks and thousands of radio stations and it’s voice-controllable if you have an Echo device to hook it up to. For local file playback, you’ll be pleased to read that the W35 supports MP3, ALAC, AAC, FLAC, WMA, AIFF and WAV at up to 24 bit/44.1kHz rates.

Mercifully, there's Bluetooth 4.0 with aptX as well as a couple of significant inputs. There’s a 3.5mm jack underneath the unit, alongside an optical input that allows you to plug in an optical output-toting TV, games console or Blu-ray player to give your AV set-up a home cinema boost.

The Elipson W35 comes in a single dark matte grey finish with an acoustic fabric mesh over the hemispheres. The aluminium belt in between is where you’ll find some button controls.

You can style the W35 out with a few accessories too. There’s some dedicated metal brackets, which have been designed to make these giant orbs appear as if they’re almost floating on your walls. And there’s also a tasteful-looking tripod stand in a silver oak finish in addition to a single pole stand with a circular base to hold this 9.5kg audio ball.

Last but not least is a limited Elipson DCW Edition which sees the W35 hanging from the ceiling as part of a light installation.

The standard Elipson W35 speaker is available now in mainland Europe for €799, and will be coming to the UK in November for £799. Nicely priced amidst many of the best wireless speaker competition, it will no doubt look to trouble the class-leading likes of the Naim Mu-so Qb 2nd Generation and Bowers & Wilkins Formation Wedge.