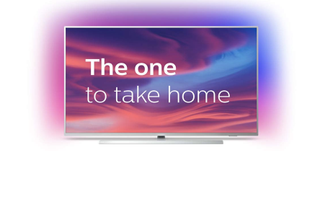 Looking forward to putting your feet up for some festive Boxing Day viewing but gripped by the nagging feeling that your telly could really do with an upgrade? Amazon may have the answer.

'The One' is a 4K HDR TV that, unusually for a TV of this price, supports both HDR10+ and Dolby Vision HDR formats. It's based on the Android TV platform, meaning it also has built-in access Netflix, Amazon Prime Video, Google Play Movies, BBC iPlayer and more. And it boasts Philips' killer TV feature: Ambilight.

This 2019 Philips model boasts some of Philips' tastiest tech, including three-sided Ambilight (which glows light behind your TV to create a more immersive picture) Dolby Atmos audio support and voice functionality via a third-party Alexa product.

We were impressed by the 7304 when we saw it at its launch event, and although we haven't had it in for a thorough review, at just £399 today we wouldn't put anyone off buying it.