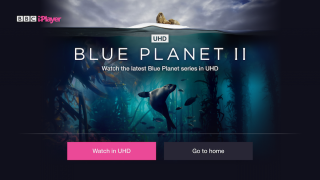 And next week, in another BBC milestone, Blue Planet II will be the first series to land on iPlayer in 4K and HDR.

While a four-minute snippet of Planet Earth II (read: BBC’s UHD trial no.1) was temporarily available on the Beeb’s catch-up service almost a year ago to this day, the arrival of BP2 (BBC’s UHD trial no.2, then) will mark the first time the BBC has shown a series – or even full episode! – in the two technologies.

The entire Sir David Attenborough-narrated sequel will be available to watch in 4K and HDR for 30 days on compatible TVs immediately after the final episode airs on BBC One on Sunday 10th December.

It will also be available to download onto devices for 30 days – but not in 4K or HDR.

After it expires on the 16th January, there’s a weeklong gap before the 4K HDR presentation becomes available on Ultra HD Blu-ray - it can be pre-ordered now and is available to buy on the 15th.

Anyone who is keeping up with the HDR hoo-ha (and every acronym that goes with it) won’t be surprised learn that Blue Planet II is streaming in Hybrid Log-Gamma, which is the High Dynamic Range format co-developed by BBC R&D and Japanese broadcaster NHK for the broadcast world.

As well as 4K and HLG HDR, the BBC is also embracing 'wider colour gamut' technology to help audiences enjoy “the most lifelike BBC TV show ever made”.

As for sound, the series will be available in a stereo mix on iPlayer – not in 5.1, sadly. According to Phil Layton, head of the broadcast & connected systems team within BBC R&D, that’s “one for next time”.

So what do you need to watch in 4K and HDR? A broadband connection with a speed of at least 23mbps (although those with a standard ADSL will still supposedly get “better quality” than the normal iPlayer offering)... and a compatible 4K TV of course!

You can see a full list of compatible devices here.

No update to your TV’s iPlayer app is necessary, and availability should be flagged within in it as soon as the series becomes available next Sunday evening.

While the BBC strongly believes the implementation of these technologies provide the “next step in reinventing the BBC for the next generation,” it is emphasizing that, at the moment, it’s “a trial, not a new service”. So it could be some time before regular series and live broadcasts arrive – as we've learned here…

With Christmas around the corner, don't forget to check out our Christmas Gift Guide 2017.

What is 4K Ultra HD? Everything you need to know

4K streaming vs 4K Blu-ray vs Blu-ray - which is better?