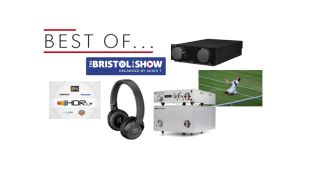 This week, the BBC is extending its 4K iPlayer trials to July's Wimbledon tennis tournament, HDR10+ has begun its logo and licensing certficiation program and The Bristol Sound & Vision Show is being rebranded.

The BBC's 4K iPlayer trials has had a few issues, but there will be more 4K coverage from the broadcaster this summer.

Next month's Wimbledon tennis championship will be broadcast in UHD and, like the World Cup trial, it will be trialled on a first come, first served basis.

Some matches will also be available to Sky Q customers via the red button on BBC 2.

HDR10+ Technologies has begun the licensing and logo certification program for the latest HDR technology.

Founded by Panasonic and Samsung, HDR10+ uses dynamic metadata, establishing itself as a direct rival to Dolby Vision.

Unlike Dolby Vision, HDR10+ licence is open and free. With over 40 companies pledging their support, there's plenty of weight behind the technology.

The UK's biggest consumer electronics show is about to get a new name.

The show's organisers, Audio T, considered the Sound & Vision title to be misleading, so from next year onwards it will be called The Bristol Hi-Fi Show.

Next year's show takes place in Bristol (of course) between Friday 22nd and Sunday 24th February 2019.

A platinum record: the vinyl LP celebrates its 70th birthday

Philips TVs to get B&W speakers in new exclusive partnership

The best 24 CD players of What Hi-Fi?'s lifetime

A new record: What Hi-Fi? remembers its first time

The complete What Hi-Fi? guide to World Cup 2018

The standard Cyrus One was a fine performer and this update improves on the base model.

However, despite its clean, open and detailed sound, it still lacks the timing and dynamic range of its competitors.

Nonetheless, it remains a strong performer, and has many new and improved features.

On paper, JBL's latest headphone features Bluetooth, noise-cancellation and a double figure battery life. For a headphone under £100, that's impressive.

It produces a powerful and weighty sound, with impressive detail and deep bass. Noise-cancelling is pretty good too.

However, that sound can be aggressive and the bass overpowering. But if you like a powerful sound, this is worth investigating.

It's one of the finest amplifiers money can buy, with a natural, insightful and transparent sound.

Some rivals offer more muscle and scale, but for those with deep enough pockets, this is an exceptional performer.