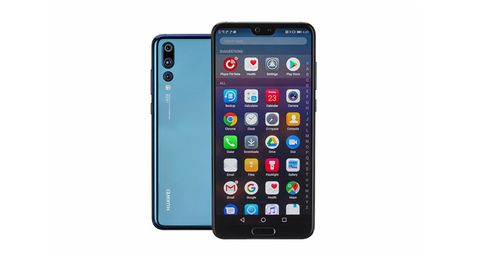 But for its average audio quality, this feature-packed flagship would bag five stars

Huawei is aiming to grab a seat at the smartphone top table, and with its latest flagship mobile - the Huawei P20 Pro - it might just deserve one.

At nearly £800 it’s expensive, but it’s also brimming with the latest features and technology, from facial recognition and fingerprint sensors to an AI-assisted camera and even the on-trend ‘notch’ design.

Crucially it looks, feels and functions at the level we expect from a flagship phone.

As befits a high-end phone in 2018, it’s a sliver of stylish glass sporting a super-size 6.1in screen.

The aluminium front and all-too-familiar looks aren’t necessarily a bad thing, but they certainly don’t make the P20 Pro stand out in the crowded smartphone market.

However, turn it around and the glass on the back is rather eye-catching - especially if you choose the midnight blue option.

It looks and feels every bit the premium phone, and it’s noticeably smarter than rivals such as the Google Pixel 2 XL - though definitely on the slippy side unless you add a case.

First seen on the iPhone X, the notch makes an appearance here too - though we’re not sure why it’s needed. The P20 Pro features a little indent at the top of the screen, which makes way for the face scanner.

The front camera and a speaker fill some of the the space, but thankfully you can remove it altogether.

A screen setting turns the top status bar all black, making the notch invisible and leaving just the grey notifications on a black bar. A smart, simple fix for notch non-believers.

Power and volume buttons are on the top right side, and there’s a home button at the bottom. While many high-end phones are removing these, Huawei has stuck with it - and added a fingerprint sensor.

On the P20 Pro, it’s no longer around the back as it was on last year’s flagship Mate 10 Pro (and many Android rivals). The sensor works as fast as any other and in a manner that is pretty much standard.

What isn’t standard is the facial recognition feature. The P20 Pro Face-ID mode means you can unlock the phone just by looking at it - although it works well in both light and dark conditions, it proves a little more temperamental should you be wearing glasses.

The phone should wake up ready to scan your face whenever you lift it up, but this function is a little hit and miss too.

When holding the phone or moving around, we sometimes find ourselves staring at a blank screen. A touch of the power button turns on the screen and awakens the face unlock, though.

The fingerprint sensor and facial recognition are two of the more eye-catching features, but this Huawei has plenty more. Huawei’s partnership with Leica has reached a pinnacle here - this phone offers an industry-leading three lenses on the main rear camera.

A 40MP lens is supported by an 8MP telephoto lens for zooming and a 20MP monochrome lens that helps add detail in low-light conditions. The front camera, meanwhile, is 24MP – around three times the number of pixels of the iPhone X’s selfie camera.

All this technology is aided by the phone’s 4D Predictive Focus feature, which calculates the motion of moving objects to take better, more stable pictures.

The camera functionality and features are plentiful, with Master AI perhaps the headline-grabber - it offers automatic adjustment of your shots for optimum results. There are Night Mode, Pro Mode, HDR, Panorama, Time-Lapse functions and more.

Like most other Android phones, there is a certain amount of bloatware here. Huawei has added its own apps, the ‘Huawei ID’ login for access to yet more Huawei services, and some slight variations to some of the phone menus. Thankfully it’s a relatively subtle take on Android.

The phone has 6GB of RAM and the company’s Kirin 970 CPU (the same as we saw on the Mate 10 Pro last year), plus 128GB of built-in storage (which should be enough for apps, photos and music). But unfortunately there’s no SD card slot for expanding the memory.

It has the same 4000mAh battery as the Mate 10 Pro, so should easily keep you going throughout the day.

At the bottom of the phone is a USB-C connection for charging and connecting the bundled headphones, but there is no 3.5mm input for your headphone jack.

Huawei supplies a generic dongle for connecting your wired headphones to the USB-C port – though if (like us) you find dongles annoying, you can always go wireless.

The P20 Pro also supports HDR, shown by an icon whenever you choose a compatible show on Netflix.

So how does that OLED screen actually look? We fire up BBC iPlayer and download some daytime TV programmes in ‘High Quality’ – and we’re impressed. The P20 Pro delivers programmes that are clean, crisp and clear.

BBC dramas are a great test of natural colours and skin tones - and compared with some rivals, the P20 Pro really is like removing a film from the screen. Faces are realistic and there’s a real sense of depth to images.

Edges are sharp and there’s impressive background detail. You can tweak the colour mode and colour temperature, but we find this Huawei phone capable of punchy, bright, vivid hues.

HDR content is supported, and the P20 Pro ticks all the boxes to support HDR programmes on Netflix. That puts it in lofty company, with plenty of flagship handsets essentially not meeting the Netflix criteria even if they do support HDR video.

The P20 Pro can boast of being co-engineered by Leica, and with its three-lens camera system, it certainly stands out on paper – and on the back of the screen. The lenses don’t sit flush, but that’s standard nowadays.

Numbers and features are only half the story, but if you want to just point and shoot to get decent pictures, the good news is you can. Images are detailed and colourful.

Details are sharp and there’s no softening to edges even on big panorama shots. It performs well in low light, with good contrast levels rendering shadows faithfully, showing a realistic difference between dark and light.

Master AI will magic up your picture and we’re pretty happy with what we see. It offers up a brighter, vivid palette, so if you’d rather a more natural, realistic look, you might be better with Pro or simply turning off Master AI.

But either way, the P20 Pro camera is comfortably one of the best on the market.

There’s no 3.5mm headphone connection, so you have to use the dongle to connect your standard headphone jack to the USB-C port instead. There are some freebie headphones, too, but they’re not much cop.

The phone supports hi-res audio up to 32bit/384kHz audio and, unlike some Android phones, there’s a simple ‘Music’ app so you don’t have to rely on Google Music or pick a generic application for your music library.

The spec may have taken a leap compared with the Huawei Mate 10 Pro, but the audio performance is similar.

A hi-res version of R.E.M’s Pilgrimage shows a decent amount of detail, with clarity at the top end and an open midrange. Bass notes are picked up well enough, too.

Sea by Blocks & Escher requires a bit more drive and punch and, compared with rival handsets, the Huawei is found a little wanting.

Kick drums don’t hit with the same thud and snares don’t quite snap with the same precision. The track sounds bigger and more spacious on rival phones, too, the P20 Pro not quite giving the track the same sense of scale.

D’Angelo’s Prayer requires timing to be right on the money to convey the necessary sleaze and subtlety, but again it sounds better on an iPhone X or the Samsung Galaxy S9.

The smartphone market is competitive enough to mean we don’t hear many poor-sounding phones, and this is a case in point.

However, if you’re prepared to spend flagship money on a phone, look elsewhere if music quality is your key concern.

The Huawei P20 Pro is a good phone with a great camera and some eye-catching features.

But it’s not the last word in audio or video performance, which means it’s not easy for us to wholeheartedly recommend.