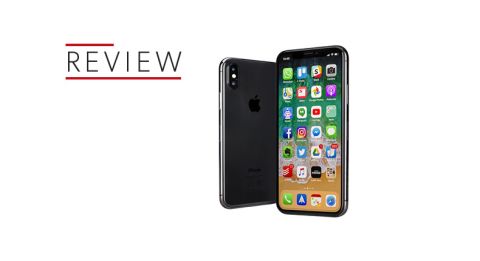 The Apple iPhone X makes major changes that not everyone will like, but the stunning screen more than makes up the difference

After 11 generations, the iPhone was becoming just a bit too predictable. The 8 and 8 Plus arrived to a rather muted reception, with the same basic shape and same iterative spec bumps we’ve been seeing for a decade.

The Apple iPhone X is something else entirely. Familiar, yet alien. The same, but different. It scraps signature features that have been ever-present up to now, and forces you to change the way you use your phone.

Welcome to Apple’s brave new world. It’s one without a home button.

The iPhone X is a bit larger than the iPhone 8, but has barely any screen bezel – meaning you get a 5.8in display where before there was only room for a 4.7in panel.

The screen stretches right the way across the front of the phone, leaving no room for a TouchID finger scanner.

Instead, a TrueDepth camera system uses facial recognition as your password. The multiple IR cameras it relies on actually eat into the usable screen space, leaving a noticeable notch at the top of the phone.

This distraction aside, the front is just a single slab of glass - and things are just as minimal around the back, with a stainless steel frame holding the two together.

Apple says its glass is some of the most durable found in any smartphone, but a case could still be a good investment.

The glass also adds a bit of heft to the phone, and doesn’t quite sit flush to the frame - there’s a bump around the sides you can’t help but feel whenever you pick up the phone.

The compact dimensions are a lot easier to manage than the iPhone 8 Plus, especially with one hand, and although the visual differences are minor, they are enough to make the X stand out amongst a crowd of iPhone 8s and 8 Pluses.

The IP67 waterproofing might not be as highly rated as Samsung’s Galaxy S8, but it’s still enough for a swim down to 1m for up to 30 minutes. Accidental dunkings shouldn’t automatically mean a call to your insurance provider.

Apple’s usual selection of colours has been stripped right back to two: Space Grey and Silver. The former is definitely subtler, with a darker stainless steel frame, whereas the Silver version is difficult to miss with its shiny polished finish.

The notch will certainly divide opinions, but in all other respects, the X has an absolutely gorgeous display.

It marks the first time an iPhone has used an OLED display, rather than LCD. Previous iPhones coped well with dark scenes, but the X goes a step further with more definition and shadow detail, thanks to the same incredible contrast and deep, inky blacks seen in Samsung’s Galaxy S8.

In fact, Samsung produces the 2436 x 1125 panel to Apple’s specifications. It uses a Pentile pixel grid, which on paper might not resolve as much detail as an RGB panel, but some clever processing makes it difficult to spot any real shortfall of resolution with the naked eye.

Textures have real definition, outlines are precise, and fine details are there when you look for them.

Apple has avoided the harsh, overly vibrant colours seen on other OLED phones by delivering a more restrained balance. Videos and photos are still rich and vivid, without appearing unnatural.

The varied colour palette of Stranger Things Season two’s opening episode really bring this to the fore, thanks in part to the X’s support for Dolby Vision.

Netflix is one of the few apps that plays HDR video right now, with others expected to follow soon.

There is some minor off-angle colour shift, but viewing angles are otherwise excellent, with little in the way of reflection to obstruct your view. Brightness is good for an OLED panel, too, making it easy to read the screen in direct sunlight.

The TrueTone adaptive colour temperature system from the iPad Pro also makes an appearance, stripping the blue light out of the display and warming things up for a more natural, subtle appearance without adversely affecting overall colour balance.

As a multimedia device, though, the notch does intrude into videos and games. Combined with the skinny 19.5:9 aspect ratio, the 5.8in iPhone X actually has less usable space overall than the 5.5in iPhone 8 Plus.

Apple has been the phone to beat when it comes to audio, despite losing the 3.5mm headphone port last year, and that doesn’t really change with the X.

Using the bundled adapter might be a deal-breaker for some, but stable wireless performance over Bluetooth goes some way to make up for it.

There’s still no official hi-res support within iTunes, even if Apple officially lists FLAC support on its website through the new My Files app. None of our CD-quality FLAC files would play.

Instead, we stick with WAV, and it’s here that performance stays as reassured as it has always been, thanks to superb timing and a fantastic balance of all the different elements that make up a track.

Bass is detailed, the midrange engaging and precise, and treble restrained, while maintaining expression and richness. The X copes brilliantly with texture and overlapping instruments, which aren’t always handled well by smartphones.

All combined, it’s a performance that really helps the iPhone X out-muscle its competition, with an experience that is only really topped by dedicated music players.

The on-board stereo speakers put in a good performance of their own, too. They are significantly louder than any iPhone to date, with a cleaner sound that commands more presence than before, so going headphone-free isn’t such a chore.

The dual-lens camera first introduced in last year’s iPhone 7 Plus has seen several improvements for the X, including optical image stabilisation on both the f/1.8 wide-angle and f/2.8 telephoto lenses, instead of just one.

The sensors themselves are uprated with larger, ‘deeper’ pixels for better low-light performance and dynamic range, plus a new colour filter for more saturated colours.

The telephoto lens is able to get closer to your subject without losing detail. It’s just as quick to focus, and matches the main sensor for quality in good light.

HDR mode is always on now, and does an excellent job of balancing tricky lighting conditions.

Like all iPhones, the X’s photos tend to lean towards more vivid, vibrant colours, which aren’t always true to life. But the X is still one of the most adept smartphone cameras we’ve tested. It is flexible too, thanks to the overhauled Portrait mode.

In default mode, the fake bokeh effect is a little more realistic, while the new Portrait Lighting effect uses both cameras to map the contours of your face, then applies digital effects to recreate the lighting of a studio lamp.

MORE: A brief history of the Apple iPhone

Like all new iPhones, the X arrives with Apple’s latest OS on board, only here you get some unique additions. The iOS 11 Control Centre is dragged down from the top right corner of the screen, rather than dragged up from the bottom, and you have to swipe up to close apps now that there’s no Home button.

A floating indicator constantly reminds you of this fact, even in certain full-screen video apps and games, which is annoying.

The way certain apps have yet to be updated to accommodate the screen notch is irritating, too – they either ignore it completely, leaving huge black bars, or forget it’s there and render important UI elements where you can’t see them.

With FaceID taking the home button’s place, you also have to double-tap the side button to activate Apple Pay, or hold it down to wake up Siri now.

At least FaceID works well, mapping and recognising your facial features in about half a second. Because it relies on infra red, it can sometimes be caught out in bright light, and covering up any part of your face will give it trouble too.

You do get to have fun with the tech, courtesy of Animojis. These animated emoticons follow your facial movements and record your speech, so you can litter your iMessage conversations with animated monkeys, unicorns, and yes, the poop emoji.

It’s a novelty, but effective in showing the TrueDepth camera in action.

With the same A11 Bionic chip as the iPhone 8 and 8 Plus, the X really does have performance to spare.

More powerful than last year’s hardware and with a new in-house graphics chip, it keeps iOS 11 running smoothly, even when running the growing number of augmented-reality games available from the App Store.

It might be physically smaller, but some double-stacked circuit board origami has made enough room inside the X for an even bigger battery than the iPhone 8 Plus. As a result, the battery will easily last an entire day with power to spare.

Apple has introduced fast charging, but you’ll have to pay an extra £75 for the USB-C to Lightning cable and USB-C power adapter. That gives you a 50 per cent recharge in 30 minutes, instead of an hour with the bundled adapter.

Wireless charging is now an option, too. You’ll need a compatible charger, but don’t have to rely on Apple – the X uses the Qi charging standard, and there are plenty of supported chargers to choose from.

It might have waved goodbye to longstanding iPhone traditions such as the home button, and that notch won’t please everyone, but the X more than makes up for it with the best screen Apple has ever fitted to a smartphone.

Audio might not have received as much attention as the display, but Apple was already ahead of the game in this field, and continues its lead here.

FaceID is a worthy replacement for the deleted fingerprint sensor too, even if it isn’t perfect. Performance is exemplary and the dual cameras are still some of the best around. Even battery life is up to par – no means a guarantee for an iPhone.

It carries a hefty price premium, but if you resisted temptation on the iPhone 8 and 8 Plus, the X will absolutely have been worth the wait.