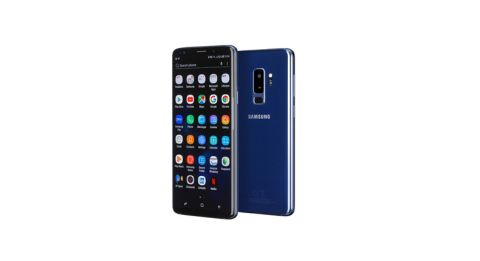 More evolution than revolution, but that’s still enough to make the S9+ the best big Android phone you can buy today

Often imitated but never bettered, the Galaxy S8 family set a trend that, 12 months later, the rest of the Android world is still trying to master.

The Galaxy S9+ doesn’t radically change that formula, but tweaks just enough of it to move the goalposts further and finally stand out from its smaller sibling, the Galaxy S9.

The eye-catching design and class-leading screen remain, but photography gets a boost from dual rear cameras and a variable aperture – making this much more than just a pretty face.

Aside from the new Lilac Purple colour option, you’ll struggle to spot any real differences between the Galaxy S9+ and its predecessor. But then the S8+ was one of the best-looking phones of 2017, so that’s not exactly a bad thing.

The S9+ has the same 18.5:9 aspect ratio screen, complete with incredibly skinny bezels at the top and bottom, and curved sides that wrap around the phone’s aluminium frame. Glass on the back also allows for wireless charging, although it is still something of a fingerprint magnet.

That glass is slightly thicker than last year, and the metal frame uses tougher 7000 series aluminium, which should make the phone a bit more durable. It’s slightly heavier, too, which adds to the premium feel.

Samsung has slimmed down the top and bottom bezels even further by embedding the IR sensors into the display. It uses a digital Home button, just like last year, so the front of the phone is almost entirely made up of screen.

The only other physical difference is at the back, where the fingerprint scanner has been re-positioned below the cameras, instead of to the side. It feels much easier to reach, but still sits precariously close to the lenses – so there’s every chance you’ll still smudge them when you go to unlock the phone.

Little else has changed, meaning you get the same IP68 water resistance for submerging down to 1.5m for up to 30 minutes, same reversible USB-C charging port, and same 3.5mm headphone port as last year.

The microSD card slot also makes a return, so you can expand the 128GB of built-in storage if you run low on space.

The Galaxy S9+’s 18.5:9 aspect ratio screen makes for a considerably slimmer handset than a typical 16:9 phone, but one that still finds room for a 6.2in AMOLED panel.

You have to look closely to spot the difference when streaming videos, but upping the resolution does add some extra detail.

As ever, Samsung’s AMOLED panel is one of the best around, with some of the deepest blacks you’ll find on a phone, and bright, punchy highlights to match.

The space scenes in Elysium have real depth, which contrast well with the harsher scenes on Earth. Maximum brightness is even higher than the Galaxy S8, so you won’t struggle to see the screen in direct sunlight.

The colour palette still leans towards oversaturation, even in the default ‘Adaptive Display’ mode, which changes settings depending on what’s on the screen.

It now comes with advanced colour balance controls to help tone down the vibrant hues, but even on the warmest setting, whites still have a slight blue tint.

The S9+ retains Mobile HDR Premium certification, so it can stream HDR video from Amazon, Netflix and YouTube. It might not match the brightness of an HDR TV, but the wider colour gamut makes a notable difference on the small screen.

Samsung’s Always-On Display makes a comeback too, putting the time, date, and any incoming notifications on-screen without having to wake the phone up first.

It hardly uses any extra battery, and can automatically switch off when you’re sleeping, so there’s no reason not to enable it.

Last year’s Galaxy didn’t have the speakers to match its screen, but the S9+ impresses with an AKG-tuned stereo set-up that’s much louder.

However, the high end is harsh, and there’s only the smallest hint of bass presence – no surprise considering the size of the speakers.

AKG has also provided the bundled in-ears, which come with a braided cable for improved durability and various sizes of tips for finding a good fit.

They’re just as bass-heavy as last year’s pair and lack detail in the lower frequencies, but the midrange does a better job, with a decent amount of expression and clarity.

The treble avoids sounding harsh, making them much better than the usual buds that come with phones. Still, spending £40 on a pair of SoundMagic E10S, or over-ears such as the AKG Y50s will give a more balanced sound overall.

With a decent pair of headphones, the S9+ sounds controlled and full-bodied with all types of music, but particularly with better quality files. The S9+ supports 24-bit/192kHz PCM and DSD hi-res audio – something you won’t find on an iPhone (as standard).

The 24-bit version of Muse’s Supremacy has real space and detail, but even Spotify tracks are lively and expressive.

The instruments on Tracy Chapman’s Fast Car have presence without crowding the vocals, and the faster pace of Rudimental’s Feel the Love stays organised.

As a sound source, the S9+ still falls slightly short of the precision and rhythmic drive of Apple’s iPhone X.

Dolby Atmos sound is on-board for the first time, producing a slightly wider effect, but one that slightly blurs and compresses the sound compared to regular playback.

You can toggle the mode on and off from the notification tray, and we prefer to keep it off most of the time.

Beyond screen size and battery life, there wasn't much to separate the Galaxy S8+ from the smaller S8. But this time, the S9+ has two rear cameras, compared to the S9's one.

It's a similar set-up to the Galaxy Note 8, with two 12MP, dual-pixel autofocus sensors that effectively give you 2x lossless zoom, letting you get closer to your subjects without relying on blurry digital magnification.

Both lenses have optical image stabilisation, which helps counter camera shake and gives low-light performance a boost, but the real upgrade is the variable aperture lens which can now switch between f/1.5 and f/2.4.

It opens up to let the maximum amount of light hit the lens, and closes in brighter scenes to maintain sharpness.

Compared with the Galaxy S8, low-light shots are clearer and more defined, although forcing f/1.5 in brighter scenes can lead to some fuzziness at the edges of your images. Overall, the S9+ is a fine smartphone camera, if not quite the best.

Smart assistant Bixby is on board, with a dedicated button below the volume rocker. It’s still too easy to activate, but you can switch it off in Settings.

Voice support is still limited to US English, Korean and Japanese, and Bixby can’t answer as many questions as Amazon’s Alexa or Apple’s Siri, but it has learned to translate text through the Bixby Vision button in the camera app.

It might share the same Exynos 9810 processor as the smaller Galaxy S9, but the S9+ takes a step up in power thanks to a mammoth 6GB of RAM.

All that extra memory helps when running two apps side-by-side with Multi-Window, to really make the most of that big screen.

As you’d expect, the eight core CPU runs apps and games impeccably, with no stutters or stalls when swiping between home screens or scrolling through web pages.

Samsung’s TouchWiz UI doesn’t slow things down at all, even with a huge list of extra features including picture-in-picture video, Edge Panel overlays to make the most of the curved screen edges, and a Game Launcher for tweaking settings and frame rates before you play.

It’s quick enough that you can turn it into a basic desktop PC using Samsung’s DeX Pad, an updated version of last year’s DeX Station. It now holds your phone horizontally, letting you use it as a touchpad instead of plugging in a mouse.

Samsung has squeezed a 3500mAh battery underneath that slim chassis, which keeps up with its main rivals.

With the screen set to half brightness, an hour of Netflix video streaming over wi-fi drained less than 10 per cent charge. When it is time to top-up, Fast Charging support can fully charge the S9+ in around an hour.

Samsung already had some of the best-looking, most desirable smartphones around, so the Galaxy S9+ didn’t need to do much to continue the trend.

The biggest improvements are the camera, the processing performance and some software refinements. But, while video quality hasn’t improved dramatically, the S9+’s predecessor was already an excellent portable movie machine.

If you don’t mind a bit of oversaturation, this is one of the best phones for a Netflix binge. Sound quality is good, particularly if you upgrade from the bundled buds.

The handset’s size may put some people off, but that’s where the Galaxy S9 comes in.

Anyone with a Galaxy S8+ in their pocket won’t feel desperate to trade in for the new model – there aren’t many must-have upgrades – but if you’ve got an earlier phone, or are swapping from another brand, the S9+ is as polished and refined as Android phones currently get.