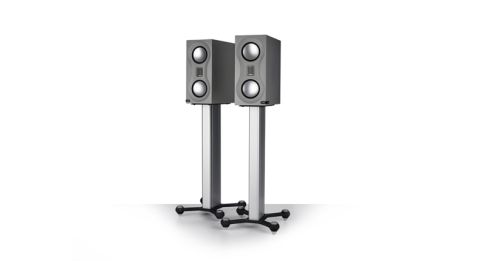 The Studio name has considerable resonance in Monitor Audio’s history.

Go back a couple of decades, before the rationalisation to the current Bronze, Silver, Gold and Platinum tiers, and you’ll find the Studio series at the top of the tree.

While these new standmounters share little technically with those highly rated models of old (bar an all-metal drive-unit array), they do have the same aim of providing class-leading performance.

The Studio doesn’t do things by halves, borrowing many of the engineering ideas used in the high-end Platinum range. Considering they weigh less than a third of the entry-level standmounters from that range, that’s an impressive achievement.

It's the exotic tweeter that initially grabs our attention. Rather than using a conventional dome design, the engineers have gone for a low-mass pleated diaphragm that works, in much the same way as an accordion, by rapidly squeezing the pleats to produce a sound.

This MPD (Micro Pleated Diaphragm) unit is claimed to produce smooth, fast and extended output. The company states upper frequency response as an impressive 60kHz (with a -6dB limit) for the Studios.

The advantage of such high reach – most standard domes struggle much beyond 25kHz – is that, all else being equal, the higher harmonics of an instrument can be reproduced more accurately.

This tweeter is mated to a pair of second-generation RDT (Rigid Diaphragm Technology) 10cm mid/bass units. These are modified versions of the midrange drivers used in the flagship Platinum PL500 speakers (£15,000 a pair).

RDT cones use a sandwich diaphragm construction of two low-mass skins with a Nomex layer in the middle. The front skin is made of C-CAM (Ceramic-Coated Aluminium Magnesium, a favourite material of Monitor Audio), while the back is woven carbon-fibre.

The result is an immensely light, rigid and well-damped structure which is claimed to reduce distortion above 300Hz by an astonishing 8dB compared to conventional alternatives. The crossover point to the tweeter is set at a fairly standard 2.7kHz.

The two mid/bass drivers are tuned by rear-firing slot ports. These ports are positioned symmetrically at the top and bottom of the cabinet to keep the pressure inside the enclosure as even as possible. The ports have been designed to allow air to pass quickly and with the minimum of noise, even when worked hard.

All drivers are mounted on a rigid die-cast aluminium sub-baffle to ensure a solid platform to work from, and clamped to the cabinet using rods.

Securing the mid/bass drivers from behind not only keeps the front panel free of unsightly bolt-heads but also provides extra bracing for the cabinet, making it even more rigid.

That cabinet is a smart and compact box. There are three finish options – the grey of our review samples alongside black or white alternatives, all in satin. We like the overall look. It’s clean and modern without being overly fussy.

At just 34cm tall, these Studios are pretty compact for the price. They’re also well made, apart from a little untidiness on the base around the threaded inserts (which are there so the speakers can be bolted onto their dedicated stands).

Unimaginatively named Stand, the dedicated supports use a laser-cut steel plate at the top, an extruded aluminium column and die-cast aluminium base. They are well made and smart in appearance, and come in a choice of textured black or white finishes.

They also cost a hefty £350 per pair, but match the speakers well both visually and acoustically. However, we get equally acceptable results with our usual Custom Design FS104 Signatures and Kudos S100 stands, so the dedicated supports are far from essential.

These speakers are designed to go fairly close to a rear wall. Monitor Audio suggests around 20 to 45cm space between speakers and brickwork, and that proves true in our listening room.

After a bit of experimentation, we end up with the Studios around 25cm out from the back wall and slightly angled in towards the listening position. This placement gives us the best balance between even tonality and convincing sound-staging.

Any speaker at this level demands suitably capable partnering equipment. We use our reference set-up of Naim NDS/555 PS music streamer and Gamut D3i/D200i pre/power, of course, as well as a more price-appropriate pairing of Cyrus’s CD i CD player and Rega’s Elex-R integrated amp.

The Monitor Audios are plenty transparent enough to show the considerable sonic differences between the two systems.

These standmounters are a little insensitive by current standards, being rated at just 86dB/W/m, and have a claimed nominal impedance of 4 ohms rather than the more usual 8ohms.

We suspect these figures are the consequence of the designers trying to get decent amounts of bass from such small speakers.

Most good amps will be fine driving such an electrical load, though. These speakers can sound a little lifeless at low volumes, so something with poke is preferable.

The Studios take a while to come on song, with our samples needing almost 100 hours before we are satisfied they have settled down.

Even then, we’re not totally convinced with what we hear. This is something of a surprise, considering both Monitor Audio’s enviable track record and the quality of the engineering used.

Make no mistake: in certain respects, the Studios have the talent to worry the class leaders.

They’re impressively agile. It’s a quality that comes to the fore regardless of whether you listen to the jazz of Miles Davis or Bruce Springsteen’s Born To Run in full flow.

Notes stop and start in an instant, without a hint of overhang or blur. This remains true regardless of where in the frequency range you look.

The standmounters also sound impressively crisp. Distortion levels seem low, and there’s little to complain about when it comes to tonal evenness or integration.

Monitor Audio has done a great job in making the sound coming out of three separate drive units appear like it’s made by just one. That highly engineered driver complement produces a sea of fine detail too, enough to rival the very best at this price.

At 34cm high these may be small speakers, but they can go loud with composure. Only at high volumes when playing something demanding (such as James Blake’s Limit To Your Love) do those twin rear-firing ports become a little noisy, though the mid/bass drivers cope remarkably well.

Don’t expect really deep bass – no speaker of this type is ever going to manage that – but when it comes to low-end extension the Studios do well for their size.

Despite all these positives, we find ourselves underwhelmed. For all their clarity, the presentation lacks solidity and dynamic punch. The Studios sound smaller than they are, short of both the scale and the sonic authority to truly convince.

Voices lack body, natural warmth and weight. The result is a presentation that, for all its detail, sounds sterile. That’s not what we want from our music.

Their size means that low-end reach is always going to be limited, but even putting aside larger price rivals such as Revel’s Concerta2 M16 and KEF LS50s these Monitor Audios struggle to better the sheer expressiveness of similarly sized but far more affordable offerings such as the Dali Spektor 2s (£200) or Q Acoustics’ 3020is (£250), even if they offer more by way of insight and clarity.

On paper, the Studios look like class-leaders in waiting. Their engineering content, stylish appearance and heritage are hard to better, but something hasn’t quite gelled.

The sound quality excels in patches, but doesn’t have the breadth of talent we would expect - demand, in fact - at this level. It’s fair to say we’re disappointed.