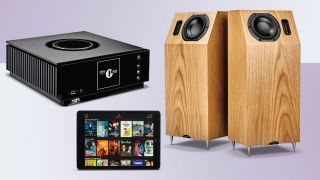 The compact disc still has its place in a hi-fi system, of course, but when it comes to a truly top-class set-up, a streamer is the thoroughly modern way to go, now that digital downloads and high-resolution streaming are becoming relatively commonplace.

The catch-all title of “streamer”does the superb Uniti Atom no great favours. This is a full hi-fi streaming system, complete with amplification. Just add a pair of speakers, and you’re up and running. Any other sources you may already own can be added to the system too, so this really can serve as an added 21st century hub to a CD or turntable system (but note that you will need to add a phono stage to use a record deck).

The Uniti Atom truly is a triumph of design. From the pleasure of playing with the coffee-coaster volume dial on the top (almost enough in itself to justify buying this system) to the full-colour LCD front-panel display that exhibits album art, Naim has nailed the crossover between lifestyle product and premium hi-fi.

The on-board amplifier is Class A/B derived from the NAIT integrated amps, which Naim says presents a number of technical difficulties in terms of production and integration, especially in so small a unit – but its efforts are richly rewarded in musical performance.

Naim claims it runs 40W per channel into 8 ohms. Suffice to say it powered our reference pair of ATC SCM50 speakers with room to spare, so has no problem with the Neat Iota Alphas.

As well as being able to store music and pick up media stored elsewhere on your network, the Uniti Atom benefits from having Google Chromecast, Tidal, Spotify Connect and Internet radio built in, with further wireless connection via AirPlay and Bluetooth.

The most immediately noticeable upgrade from the UnitiQute 2 is the level of clarity and insight. The former is still an exceptional product, which has found its home on our personal hi-fi racks since we reviewed it a few years ago, but this is like opening a door and listening to the music from inside the room.

To say it sounds lean does not mean the Uniti Atom is lacking in weight, it just doesn’t carry any fat. Timing was a forte of the last generation of Naim’s all-in-ones, so we’re pleased to find none of that is sacrificed this time around.

The Uniti Atom treats even very diverse pieces of music with the same level of insight, regimental timing and contouring dynamics. The only method of input we could say shows any true difference in character is the analogue – that level of clarity becoming marginally less sharp, and offering up a generally warmer overall performance.

But this is fundamentally a product built to a digital blueprint, and those who covet what may be described as a more traditional analogue sound from such components will only see that as a positive.

And the Naim’s overall ability marries beautifully with Neat’s somewhat quirky Iota Alpha speakers. They are odd-looking things. Thanks to the mixture of knee-high stature and strangely angled appearance, it’s difficult to take them seriously – and yet their presence in this system clearly shows that you should.

We’re big fans of the original Iota standmounters. They remain a superb utility choice; small enough to squeeze into all sorts of places but always performing well. The idea behind the Iota Alpha is to take this can-do attitude and add an extra dose of sonic authority and scale.

These Neats aren’t particularly fussy about placement. They need a bit of wall reinforcement – we place them around 30cm out into the room, with just a hint of angle towards the listening position. The position of the tweeters gives extra scope for tweaking. Leave them on the outer edges, as we end up doing, and you’ll get a wider spread of sound. Leaving them on the inside edges adds just a touch more focus. The optimum placement will depend on your room and system.

If you were thinking short speakers mean a soundstage aimed at your knees you’d be wrong. That angled baffle helps throw the sound upward, resulting in a surprisingly expansive and spacious presentation that wouldn’t be out of place from rivals at twice the height. There’s a good amount of precision here, and the presentation stays stable even when the music becomes demanding.

The Alpha’s presentation is wonderfully cohesive, the three drivers integrating seamlessly, and with an appealing robust quality. Dynamics are strong too, with larger-scale dynamic shifts handled with confidence, even at higher volumes.

Tonally these speakers aren’t wholly even, but the deviation isn’t enough to worry us. Once we start listening, it’s the Neats’ ability to capture the essence of the music that grabs our attention, rather than any tonal shortcoming.

While there is a good amount of low-frequency action, it’s fair to say larger, similarly priced traditional floorstanders from the likes of B&W, Tannoy or Q Acoustics will dig deeper and louder.

It would be unrealistic to expect such compact speakers to fill a larger room properly, but in a small to medium space they’re good for anything below nightclub levels.

These Neats are surprising speakers. If you’re after fuss-free floorstanders that don’t dominate your listening room there are few better alternatives. They sound way bigger than they look and deliver a combination of detail, dynamics and rhythmic integrity that competes with the best of the traditional competition.

Which means that, when they’re combined with the equally bijou Naim Uniti Atom, you’ve got a top-class hi-fi streaming system that sounds wonderful, but doesn’t dominate a room in the way many systems of old would inevitably do. This is discreet, beautifully reproduced music.

And to run such a modern set-up, it makes sense to use a modern control method. So we’ve plumped for the best tablet around, Apple’s ubiquitous iPad.

You are probably interested to know what it’s like as a device for watching movies and TV shows and perhaps listening to a bit of music. The answer is very good indeed and, in fact, just a touch better than last year - particularly if you fancy a bit of on-the-go HDR action.

It’s only a subtle difference though, so if you already own the 2017 model we really can't recommend upgrading. For everyone else, though, the 2018 iPad makes an excellent purchase. It’s comfortably the best tablet available at this sort of money.

You don’t strictly need an iPad to control the Atom, but it makes for an extremely elegant interface through which to track down your music from a NAS drive, or find radio stations and streaming sources.

Put all three of these five-star products together, and you’ve got yourself a belter of a modern streaming system.