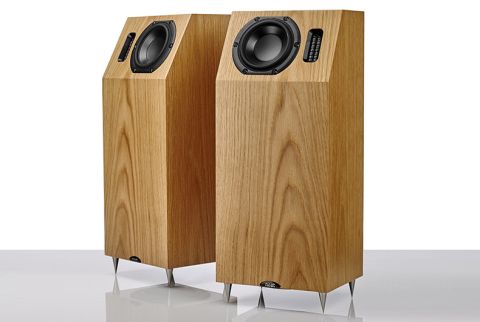 Neat’s Iota Alphas are odd-looking things. Thanks to the mixture of knee-high stature and strangely angled appearance, it’s difficult to take them seriously.

Yet, if you believe beauty is as beauty does, these floorstanders are something to savour. They’re for people craving great sound without room-dominating hi-fi.

We’re big fans of the original Iota standmounters. They remain a superb utility choice: they're small enough to squeeze into all sorts of places but always perform well.

The idea behind Iota Alpha is to take this can-do attitude and add an extra dose of sonic authority and scale.

The business end of the Alpha is straight from the original. A 50mm Emit magnetic/planar tweeter sits alongside a 10cm polypropylene mid/bass unit.

However, here they’re in a sealed compartment in an effort to help integration with the downward-facing 13.5cm pulp paper bass unit. Bass is augmented by a rear-firing port.

The three drivers are linked through a relatively simple crossover that uses first- and second-order slopes for filtering. All the components are hard-wired to maintain sonic integrity, and include Mundorf capacitors and air core inductors.

Connection is limited to a single pair of high quality terminals. Some may bemoan the lack of biwiring, but the fuss-free attitude of these Neats is reinforced by the singular connection.

Take care when you lift the speakers out of the box - that bass unit is exposed and it’s easy to damage.

There are some distinctive spikes in the packaging. You’ll need these because they set the gap between bass driver and floor, and so to a large extent govern the quality of the low frequencies.

Build quality is good. These feel like solid boxes, and the finish is pleasing too. Those spikes aren’t particularly sharp, though, so may have issues piercing through thick carpet. It’s worth persisting, as a secure footing will bring sonic benefits.

These Neats aren’t particularly fussy about placement. They need a bit of reinforcement from a rear wall – we place them around 30cm out into the room, with just a hint of angle towards the listening position.

The position of the tweeters gives extra scope for tweaking. Leave them on the outer edges, as we end up doing, and you’ll get a wider spread of sound. Leaving them on the inside adds just a touch more focus. The optimum placement depends on your room and system.

While these speakers aren’t particularly picky, they respond well to higher quality kit. We think something like Rega’s Elex-R integrated amplifier with a suitably capable source would be a good starting point. If you move on to more ambitious electronics the Alphas have enough sonic stretch to take it in their stride.

If you were thinking short speakers mean a soundstage aimed at your knees, you’d be wrong.

That angled baffle helps throw the sound upward, resulting in a surprisingly expansive and spacious presentation that wouldn’t be out of place from rivals twice the height. There’s a good amount of precision here, and the presentation stays stable even when the music becomes demanding.

We start with Tchaikovsky’s Swan Lake and the Neats sound way bigger than expected, delivering a sense of authority and solidity totally out of keeping with their size. With eyes closed we would never guess the speakers are so small.

The Alpha’s presentation is wonderfully cohesive, the three drivers integrating seamlessly, and the sound is appealingly robust. Dynamics are strong too, with larger-scale dynamic shifts handled with confidence even at higher volumes.

Tonally these speakers aren’t wholly even, but the deviation isn’t enough to worry us. Once we start listening, the Neat’s ability to capture the essence of the music grabs our attention, rather than any tonal shortcoming.

Moving onto Stevie Wonder’s Superstition shows off the Iota Alphas' excellent handling of rhythms. It’s surefooted, and communicates the drive of the music superbly.

There’s plenty of attack here, yet enough in the way of insight and refinement to keep us happy. Stevie’s distinctive vocals come through with clarity and passion, while the hard-charging instrumentation is organised well.

While there is a good amount of low-frequency action it’s fair to say larger, similarly priced traditional floorstanders from the likes of B&W, Tannoy or Q Acoustics will dig deeper and hit harder.

It would be unrealistic to expect such compact speakers to fill a larger room properly, but in a small-to-medium space they’re fine for anything below nightclub levels.

These Neats are surprising speakers. If you’re after fuss-free floorstanders that don’t dominate your listening room there are few better alternatives.

They sound way bigger than they look, and deliver a combination of detail, dynamics and rhythmic integrity that competes with the best of the traditional competition.

They’re not about analysing the recording, more about having fun. That’s just fine with us.

See all our Neat reviews