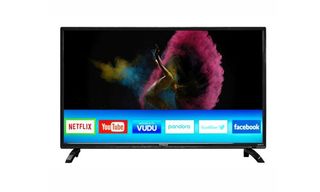 It's not all about big-screen TVs on Amazon Prime Day. If you're looking for a smaller set - say for the kitchen or den - you can pick up a 32in screen for around $100.

Walmart is offering the Polaroid 32T2H HD TV at a very competitive $99.99 today. It's an LCD screen with a direct LED backlight, Dolby Audio, two HDMIs and Polaroid Smart TV functionality including Netflix and YouTube.

Polaroid 32T2H HD TV was now $99.99 at Walmart
It may not have all the top-level specs such as 4K and HDR, but this regular HD set could be ideal if you want a second TV for the kids or another room in the house.View Deal

Both are 2017 models but still have Ultra High-Definition resolution, HDR (High Dynamic range), Sony's 4K X-Reality Pro engine, Triluminous display and Android TV smarts. Looks like a bit of a bargain to us.

Sony XBR43X800E 4K TV down to $399 from at Walmart
A 50% reduction in the price of this Sony Bravia UHD TV is not to be ignored. Sony is one of the top brands in TV tech and this looks like a good deal.
View Deal

Sony XBR49X800E down to $439 from at Walmart
A decent-sized UHD screen at a great price. It may not be the newest model, but at this price, who cares?View Deal