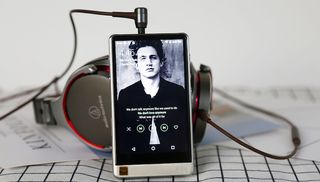 There is no doubt getting a good portable music player without spending a lot of money is a difficult feat. You want something to give you improved sound quality over from high-end smartphones like the iPhone X or the Samsung Galaxy Note 8.

Enter the HiBy R6, which sets itself the lofty goal of being the "most advanced Android hi-fi player". It's being funded on Indiegogo by HiBy Music, the company that works with Shanling to develop its music players.

It has a built-in 32GB of internal storage, and is capable of supporting 32bit/384kHz audio for all the usual file types like FLAC, ALAC, and WAV. There are line out and coaxial digital outputs.

Wi-fi and Bluetooth are available too, and the player has a claimed battery life of 12 hours - it's charged via a USB-C connection. With smartphones increasingly moving towards that input standard, it's nice to see other products embrace it too.

HiBy also says the player can bypass Android's Sample Rate Conversion (SRC), in order to (supposedly) produce a cleaner signal than other Android players or smartphones. Impressive on paper but the proof, as always, is in the listening.

If you're intrigued, you can back the R6 for $529 (around £400), but the usual warnings apply - crowdfunding campaigns do not always come through, and the quality of the product is not guaranteed.

And, of course, we'd recommend waiting until What Hi-Fi? has tested it, too.

LG to collaborate with Meridian on future audio products