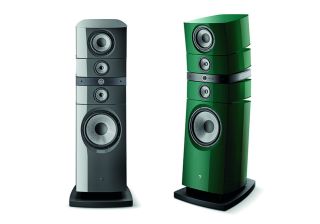 Announced at the Munich High End Show 2018, the Grande Utopia Em Evo and Stella Utopia Em Evo feature the same technology as the existing models in the range.

Both adopt the 'W' cones, Beryllium tweeter and electro-magnet woofer, but they also advance the design with the latest Focal developments.

One of those is its MRR (Machined Reinforcement Rings) system, essentially aluminium rings positioned between the front of the driver and the driver basket behind. Focal claims this arrangement improves rigidity.

Its NIC (Neutral Inductance Circuit) technology hones a Focal-made ‘faraday’ ring to help stabilise the magnetic field, making it less susceptible to changes in the driver’s make-up and the current going through it.

And, finally, the crossover has also been redesigned with upgraded components.

Meanwhile, the Stella Utopia EM Evo is more compact and features a three-way design. It forgoes its sibling’s ‘W’ mid/bass driver, and has a slightly smaller 33cm electro-magnet woofer.

The cabinet is fully lacquered, with the front and sides in a single colour and details in black. There’s a choice of three finishes inspired by the automotive world – metallic blue, ash grey and British Racing green – as well as black and white options.