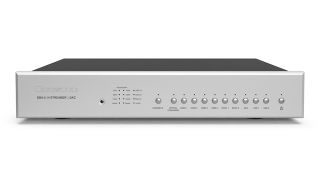 Bryston has today revealed the latest expansion to its BDA DAC range – and it isn't just a DAC. The BDA-3.14 utilises the existing BDA-3’s DAC architecture but builds on its offering with an array of streaming features.

The streaming DAC (or DAC/streamer combo, if you prefer) is based on a built-in music player that provides access to NAS storage, USB devices and internet radio as well as hi-res streaming services such as Qobuz and Tidal. It’s also Roon compatible and, naturally for a Bryston DAC, has a plethora of digital connections: four 2-channel HDMI, asynchronous USB, optical and coaxial. For those with smart home systems, Bryston’s network module can be controlled through TCP/IP and RS-232 interfaces.

Its BDA-3 DAC architecture supports PCM files up to 32-bit/384 kHz in addition to DSD 11.2Mbps, with all files played in their native form. Bryston uses a re-clocking circuit to reduce jitter to “nearly unmeasurable levels”, while its analogue section is beneficially absent of integrated circuits that tend to limit bandwidth and dynamic range.

Its digital volume control can adjust the volume of a connected amplifier, and an update to Bryston's Manic Moose application promises improved playback control from a smartphone, tablet and computer.