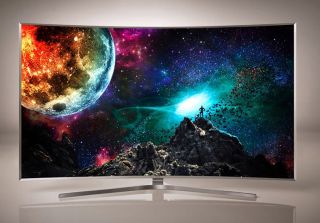 It's no surprise that we've seen a barrage of new TVs unveiled at CES this year - and that's just the ones we've seen - with new ranges from B&O, LG, Samsung, Seiki, Sharp, Sony and Panasonic, to focus on some of the bigger names and more interesting sets.

These new ranges incorporate a range of new TV technologies as well. Some of which we're accustomed - 4K and OLED, for example - but also some newer ones that we'll no doubt see more of in the next few years, including 4K OLED, Quantum Dot and Samsung's take on that tech, SUHD.

To save you the time of rifling through the numerous CES 2015 pages, we've rounded up all of the new TV launches into one. So, without further ado.

We already knew that LG was championing OLED technology in its TVs, but it became more apparent at CES 2015, with seven new Ultra HD 4K OLED TVs announced.

These seven new TVs will come comprise a mix of curved, flat and flexible designs. Flat OLED TVs have been quite rare until now, but LG has finally released them to the masses.

The 77EG9700 curved screen stands on its own, as does the flat-screen 66EF9800. Finally, the 77EF9000 is the only flexible model announced. This 4K OLED screen will be able to move between flat and curved at the push of a button.

All of the new TV's will benefit from LG's updated webOS 2.0 software and audio systems developed alongside Harman Kardon.

All of the new Panasonic TVs will feature the company's own Life+Screen smart TV functionality, which is now powered by the Firefox operating system.

Panasonic has developed a new Wide Colour Phosphor technology, which is said to deliver "high energy efficiency and brightness".

There was also a prototype Panasonic OLED TV on display at CES - will it actually get a release this year? We shall see.

Samsung announced a new range of SUHD TVs at CES 2015, with the company claiming to have made "ground-breaking" advanced in performance, as well as being more eco-friendly.

A re-mastering engine analyses the brightness of images and adjusts power consumption accordingly while still delivering "class-leading" contrast levels. Samsung has also refined its curved design into what it's now calling 'chamfer'. The intention is to offer a greater apparent depth to the picture.

Samsung also confirmed that its new TVs will now be powered by the open-source Tizen platform.

Sony had one the biggest launches of the show, with 28 new TVs. These are split into two ranges: 4K and Full HD. Both ranges contain six different models in a variety of screen sizes. Within the 4K range also sits the world's thinnest 4K TV; the X90C, at just 4.9mm thin at its slimmest point.

Starting with 4K, all new models will receive Sony's new X1 processor, which is claimed to deliver Sony's best-ever picture quality in terms clarity, colour and contrast. Sony says it doesn't matter if the source is SD or HD, as it will upscale both to near 4K quality.

High-resolution audio will also feature for the first time in the two high-end 4K TVs.

Both 4K TVs and Full HD TVs will run on Google's Android TV platform, meaning users can access the Play store of apps, movies and games. The TVs can be controlled via voice too thanks to a built-in microphone on the remote.

For a full list of features of both 4K and Full HD TVs, head to our Sony TV CES 2015 page.

Sharp also announced nine new TVs at CES 2015, all of which will be 4K Ultra HD. The new models will split across three ranges: UB30; UE30 and UH30. Screen sizes will range from 43in all the way up to 80in. All sets will have the all important H.265 decoding for streaming 4K content from Netflix and YouTube.

The mid-level and high-end UE30 and UH30 series will run on the Android TV platform, which will include voice search. Smart Control 4.0 will also feature, allowing users to browse TV, satellite and internet content from one screen.

Sharp also unveiled a "Beyond 4K" 4K TV, which uses some clever manipulation to create 42 million more subpixels on the screen compares to a 'standard' 4K TV.

Other brands and technologies

Seiki launched a range of Freeview Connect TVs at CES 2015. Freeview Connect will deliver live and on-demand TV content over the Internet, as well as providing access to services such as Netflix and YouTube.

The new Seiki TVs will come in screen sizes ranging from 32in to 50in. Initially available as Full HD sets, Seiki said 4K versions can be expeceted later in the year.

Bang & Olufsen unveiled a 75in version of its BeoVision Avant 4K TV. You can find a review of the 55in version in the January issue of What Hi-Fi? Sound and Vision.

CES 2015 was also all about TV technologies. We've seen 4K Ultra HD and OLED before, but CES 2015 has seen a surge in the number of sets manufacturers have produced that adopt these technologies.

Quantum Dot was a new buzzword that floated around the showrooms, with many manufacturers using the tech to help improve the 4K picture of their screens.

Another was HDR, or High Dynamic Range, designed to expand the contrast ratio - and hence the dynamic range - of TV pictures to make them even more lifelike. Netflix and LG are partnering on developing HDR content and hardware, Panasonic unveiled its first prototype 4K Blu-ray player which it says will be HDR compatible and Dolby is backing the technology with its Dolby Vision platform.

Samsung unveiled a new line of SUHD TVs as well. The S doesn't stand for anything specific, but Samsung says they'll be an enhanced version of its regular 4K UHD TVs.