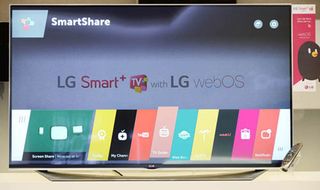 A new "My Channels" feature will allow users to group together favourite TV and set-top box channels on the Launcher Bar for quicker access and ultimately, a smoother experience.

LG has also said it is strengthening connections with Netflix and Amazon to bring its customers a greater selection of 4K content. Netflix currently offers House of Cards, Breaking Bad and its new series Marco Polo in 4K Ultra HD resolution.

Amazon Prime Instant Video meanwhile gives access to a range of 4K movies including After Earth, Elysium, The Amazing Spider Man 2 and The Da Vinci Code.

In-kyu Lee, senior vice president and head of the TV and monitor division at the LG, said of the new operating system: “With the newest features introduced in webOS 2.0, the overall user experience has become even simpler, easier and more intuitive.

“The webOS platform is a great example of our commitment to taking a leadership role in the next generation TV market with a truly innovative Smart TV solution.”

LG will be displaying the new webOS 2.0 OS at CES 2015 along with its new range of TVs, which will include a range of Quantum Dot TVs.