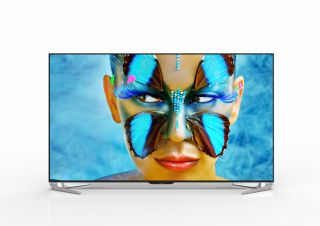 Screen sizes for Sharp's new 4K TVs will range from 43in to the company's first ever 80 incher. All 4K sets will have H.265 and VP9 decoding for 4K content, the latter being vital for streaming 4K video from YouTube.

The UE30 and UH30 ranges both run on the Android TV platform, which means you'll have access to movies, apps and games from Google Play - plus additional features like voice search. The sets will also feature Smart Control 4.0 - a new, customisable user interface. Sharp claims it will allow you to browse TV, satellite and internet content through just one menu screen.

On certain models, you'll be able to take advantage of Sharp's dual stand placement - a feature similar to that already found on some of Sony's most recent sets. Depending on the width of your TV stand, you can either position the feet spaced wide apart or closer together towards the middle of the set.

MORE: Read all our Sharp reviews and news

The key differences between this and the entry-level UB30 range, are:

Dual stand positioning on the 70in and 80in models

Flagship range, available in 70 and 80in screen sizes

The key differences between this and the UE30 range, are:

UK pricing is still to be confirmed, but we'll update the story just as soon as we have the info.

Not content with three new ranges of 4K TVs, Sharp also previewed a brand new, stand-alone model which it claimed could bring people closer to 8K. Confusingly, the set in question actually has the resolution of a standard 4K set (3840x2160), but the TV does some clever vertical and horizontal pixel manupulation which allows Sharp to put its own little twist on the resolution. There's no model number or pricing for this 80in set, but it's due to go on sale in the second half of 2015.