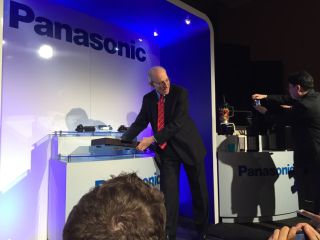 There were few major surprises from Panasonic at CES 2015, although there was a debut for a prototype 4K Blu-ray player (shown above), which it promises will arrive this year. The manufacturer also launched the new range of Technics hi-fi components in the US, but we've already seen those in the UK.

4K Ultra HD is clearly at the heart of the company's TV/video strategy, with a four-strong range of new 4K LED screens (nine models in total) - including the TC-50CX600U, which won a CES 2015 Innovation Award.

The full TV line-up comprises the flagship CX850 series, then the CX800, followed by the mid-range CX650 and CX600 ranges. All of these will feature Panasonic's Life+Screen smart TV functionality, which is powered by the Firefox OS, and Panasonic tells us its range will also include a number of curved screens, though there were none on show at CES 2015.

The CX models use a new Wide Colour Phosphor technology that Panasonic says delivers high energy efficiency and improved brightness. By developing a new phosphor with RGB spectral characteristics, the company says it has developed "dramatic energy savings of more than 40 per cent" over its 2014 UHD TVs.

We're hoping find out more about Panasonic's 2015 TV range at its European Convention in Frankfurt next month.

Details of the 4K Blu-ray player remain sketchy, but it will be HDR (High Dynamic Range)-compatible and will sit above two other new Blu-ray models - the Panasonic DMP-BDT270 with 4K upscaling/DLNA/web browser and the DMP-BD93.

Both models support Miracast for mirroring the content of a smartphone or tablet directly on to a large TV screen.

Pricing and availability of all three Blu-ray players has yet to be confirmed.

Panasonic has also confirmed that it has joined the newly-formed UHD Alliance to try and set industry-wide standards for Ultra High Definition.

MORE: Panasonic 2015 TVs - everything you need to know