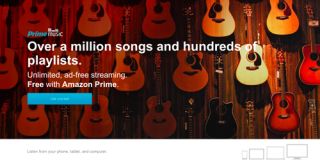 "Over a million songs and hundreds of playlists" – that's what's being promised as part of Amazon's new Music Prime streaming service, which now appears to have gone live in the US.

Access to the new music streaming service comes part of the current Amazon Prime subscription – $99 a year in the US or £79 in the UK – and will offer "unlimited, ad-free streaming".

With Spotify boasting a catalogue of more than 20 million songs at its most, Amazon can't match the market leading streaming services on that front – but perhaps it might be looking to.

According to last week's reports, it's suggested that Amazon won't be focusing on recent releases – the catalogue will, instead, feature songs and albums that are at least six months old.

And one of the sources revealed that Amazon would "pick and choose" exactly what albums would be streamed, with data from its retail operations used to inform the music selections.

Songs will be streamed in MP3 format at variable bit rates, although it'll be looking to achieve an average of 250kbps. A typical file size, if downloading, is expected to take around 5MB of space on your machine.

The service will work on iOS and Android smartphones and tablets; PCs and Macs; and Kindle Fire tablets from Amazon, with songs available to download for offline listening if you prefer.

Amazon VP of digital music Steve Boom has justified Amazon's smaller catalogue, having been quoted as saying: "A lot of these services have more music than people will ever listen to."