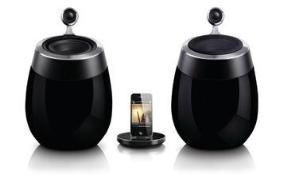 Philips has confirmed that its DS9800 Fidelio SoundSphere AirPlay system will be available from John Lewis stores nationwide from July for £699.

The company has also developed a special Fidelio App that can be downloaded from the Apple App store and allows an Apple device to control and fine tune the sound of the dock.

The Fidelio SoundSphere is wi-fi-enabled and supports Apple Airplay, enabling streaming direct from iTunes 10.1 or later, plus iPhone, iPad or iPod Touch with iOS 4.2 or later.

The separate speakers have a curved design, with free-floating tweeters on top of both speakers.

Due out this summer, the Fidelio SoundSphere has a retail price of 799 euros, so around £700.