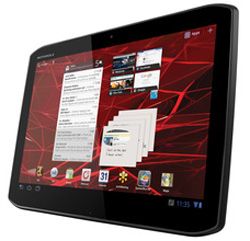 Powered by the latest Android 3.2 OS, the two new tablets are due out in the UK later this month.

The Xoom 2 has the same 10.1in format screen as the original Xoom, while the Xoom 2 Media Edition has a smaller 8.2in screen.

Motorola claims the new Xoom tablets will deliver better graphics for gaming, as well as being thinner, lighter and faster.

The two tablets are due out later this month.