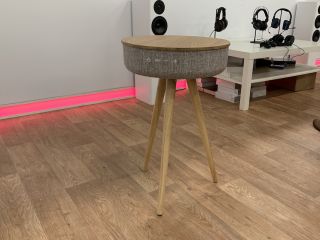 'Convergence' might be a bit of a dirty word in the realm of tech (like 'fusion' in cooking), but it sure can make for some useful (tasty) combinations. Take the Victrola VS-140, which looks so convincing as a coffee table you don't immediately notice that it's also a speaker.

Between the oak wooden panel at the top and the three legs below is a fully functioning Bluetooth 4.2 speaker with wide-dispersion stereo speakers, a 3.5mm auxiliary input and two USB sockets for keeping your source device charged. There's even a hidden mic for making and taking phone calls.

It's got a built-in battery, too, enabling you to move it away from a wall socket for a claimed 8-10 hours of untethered music playback.

Having seen the VS-140 in the flesh, we can confirm that it's quite a stylish-looking device. It completely convinces as a coffee table, with the neutral-coloured woven mesh that covers the speaker section being sensibly subdued. The stitched control buttons on the front are a neat touch, too.

But does it sounds any good? We had a very brief listen at a noisy press event so can't be sure, but our first sonic impressions certainly weren't bad. It does seem that wide dispersion has been prioritised over focus, though, and that could be a problem for serious listening.

But then, the Victrola isn't really about serious listening, is it? It's more about getting music into your house in the most subtle way possible, and it looks to be pretty successful in that regard.