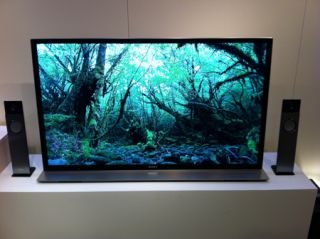 Mindful of soaring electricity prices, Sony's TV division is working hard to reduce the energy consumption of its flatscreen TVs.

The older model consumed up to 112W according to the electricity meter we saw, while the new one ran between 40-80W.

Sony claims the latest 55KDL-HX753 will drop down to an energy consumption of 40W during darker scenes, and won't go above 100W when displaying very bright pictures.

And those figures should improve even further when the firm starts producing OLED screens – which it's developing for its professional broadcast division – with a further 30-40% energy saving over LCD.