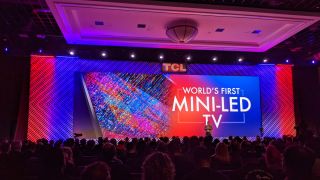 We can't see traditional LCD and OLED TV technologies going anywhere anytime soon, but there are new, next-generation display solutions that have escalated from whispers to conversation points and have even materialised into TVs in recent months. One of them is Mini-LED, another is MicroLED.

Despite being similar in name, they are actually markedly different – vastly different technologically, backed by different TV manufacturers, and attached to very different asking prices. While Mini-LED is being pitched as an affordable OLED rival for the here and now, MicroLED is a very intricate, highly expensive proposition promising to, one day, be the gold standard of TV.

Below we explain what Mini-LED is, how it compares to LCD, OLED and MicroLED, and how you can get your hands on it (and if you should even want to)...

An evolutionary rather than revolutionary technology, Mini-LED essentially advances traditional LCD tech in an effort to deliver a wider contrast ratio and deeper blacks. It promises to be a premium offering – like OLED is.

All LCD TVs use a backlight to provide the light source, and Mini-LED TVs are no different.

So how is Mini-LED different? Essentially, the LEDs on a Mini-LED's backlight are much, much smaller than those used on a traditional LCD TV's, and therefore there are a great deal more of them – we're talking tens of thousands rather than tens of hundreds. The idea is that the more LEDs used, the greater control the TV manufacturer has over over local dimming. i.e. how bright or dim parts of the screen can go. Theoretically as a result, mini-LEDs can produce pictures with better contrast: pictures with more precise shading and, in turn, colour reproduction than your average LCD TV.

With a backlight, Mini-LED TVs can reach a higher peak brightness than an OLED TV is capable of, and as there is greater control over what portions of the screen are dark it's easier to achieve deeper blacks. That said, as there's still a backlight in the mix and the LEDs can't turn completely off as the self-emissive diodes in OLEDs can, it's doubtful they'll be able to produce quite the lights-off blacks OLEDs can.

Mini-LED vs MicroLED: what's the difference?

MicroLED sets, such as Samsung’s The Wall and Sony’s Crystal LED TVs, are similar to OLEDs in their self-emissive properties, then, but instead of using organic light emitting diodes they use tiny, non-organic LEDs - three (red, green and blue) per pixel. The fact they're not organic means they should have a long lifespan and not succumb to fading, they should be capable of much higher brightness, and they're power-efficient because they don't need to shine through a colour filter.

Each pixel requiring three LEDs does, however, mean a 4K set requires 25 million of the tiny things, and mass producing these in perfect alignment and with no variation in brightness is apparently a very serious challenge. Because of this, and the benchmark quality these TVs should produce, be prepared for the first MicroLEDs to be super (five-figure) expensive, as Samsung's The Wall installation is.

Mini-LED is a much less intricate technology than MicroLED, then, and can be seen as a transitional technology between traditional LCD and MicroLED – as an affordable alternative to OLED.

Which TV brands are onboard?

TCL is the TV brand associated with Mini-LED tech right now. Right now, the Chinese company is the only brand with Mini-LED TVs on sale. It was the first out of the gates last year with two Mini-LED models making up its 8-Series. The 65in model currently costs $1600 at Best Buy, while the 75in variant is $2600. We await their arrival in the EU and UK.

At CES 2020 in January, TCL was keen to keep the Mini-LED ball rolling. It showed off its first 8K Mini-LED TV – also part of its flagship 8-Series – and announced that a new (and expectedly cheaper) Mini-LED model would arrive as part of the 6-Series range later this year.

TCL's 8-Series Mini-LED TVs combine Quantum Dot and LCD technology, fusing over 25,000 LEDs directly into the glass substrate of the panel – a fusion of light and glass that aims to minimise the filters between the backlight and LED, to produce what the company claims is ‘unrivalled contrast and brilliant clarity’.

The technology is so new (and inaccessible for us here in the UK) that it's too early to tell how it will fare against OLED. Some will likely skip the technology altogether – Samsung could leapfrog such a solution to focus on making MicroLED more accessible, for example – but as TV manufacturers around the world are under pressure from the increasing affordability of OLED to reach for something better than 'just LCD', we wouldn't be surprised to see others pledging their commitments to Mini-LED technology this year. Watch this space.