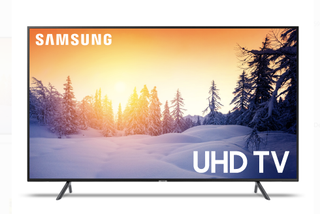 We've said it before and we'll say it again: if a new slimline 4K TV is on your Black Friday wish-list, there's very little point in waiting – particularly when Samsung is making one of its core models available with such big, early discounts.

Obviously as the big weekend (culminating in Cyber Monday) approaches, we'll bring you loads more deals, but our hot tip for today is Walmart. Why? The retail giant is offering up to 54 per cent off Samsung NU6900 series smart 4K TVs. Yes, that's 4K UHD resolution with HDR10+ and smarts baked in, all bearing the Samsung name, and for less than half the list price.

The 43-inch, 65-inch and 75-inch Samsung 4K UHD NU6900 models are all part of the deal drop, and while the smallest screen nets you that top-end, less-than-half-price saving, the largest still bags you a whopping 50 per cent off.

Samsung 75" 4K UHD smart TV UN75NU6900 $748 (save 50%) at Walmart
This 75-inch Samsung 4K UHD smart TV with HDR is half price. Yes, it's half price. You save what you spend. It's 50% off. We don't know how else to say it, so we'll simply add that while we haven't personally had the pleasure of testing this particular model, it's part of a very consistent overall range and looks like a steal at this sort of price.
View Deal

Samsung 43" 4K UHD smart TV UN43NU6900 $228 (save 54%) at Walmart
As screen sizes inch ever bigger, 43-inch displays are becoming something of a rarity, but this bijou Samsung TV boasts 4K UHD resolution and over 54% off. You get two HDMI connections and Samsung's SmartThings platform, too. Guest bedroom? College dorm room? It could be the solution. Little money for a 4K bearing the trusted Samsung name. View Deal

Samsung 65" 4K UHD smart TV UN65NU6900 $478 at Walmart
It must be Black Friday if a 40% reduction on a Samsung 4K UHD smart TV isn't the biggest saving to be had in this little trio of deals – and it works out at a tidy $320 off. While we haven't gone the full 12 rounds with this particular model, a 65" sub-$500 Samsung 4K can only be a solid bargain if you're looking to upgrade your TV by Cyber Monday.View Deal

The NU6900 is kitted out with Samsung's SmartThings interface. You'll have access to apps from Samsung's extensive app store, as well as support for the excellent Apple TV app.

The line may not offer Samsung's quantum-dot QLED display (it's an edge-lit LED screen), and there's no voice control, but for 4K resolution alongside Samsung's proprietary high-dynamic range format, HDR10+, it's little money for both smaller and larger sized 4K Samsung TVs.

More great savings as and when we get them but remember, we can't vouch for stock availability at the time of going to press. When they're gone, they're gone...

How to choose the right TV on Black Friday

Should you buy a TCL TV on Black Friday?

Should you buy a Hisense TV on Black Friday?