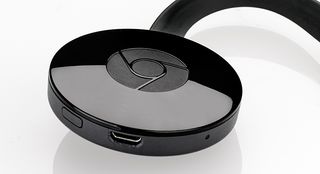 Google could soon release a next-gen Chromecast streamer with improved wi-fi connectivity and full Bluetooth support, as suggested by the company’s latest FCC filing, which was first spotted by Variety.

The application for the ‘Multimedia Device with BLE/BT, 2.4Ghz and 5GHz WLAN Radios’ (with the model number NC2-6A5B) suggests Google is improving wi-fi connectivity in a forthcoming Chromecast device by increasing the antenna gain on the 5GHz band from 2.1dB to 4dB.

And while the current Chromecast (pictured top) does use a Bluetooth chip for its set-up process, the certification could mean future versions have full support enabling wireless music playback.

It appears the forthcoming Chromecast will sport the same design as the current model, only bringing these internal changes to the table. It’s likely to be announced during Google’s annual October launch event (the FCC filing’s confidentiality date is for the 28th October…), although the brighter spotlight will invariably be on the announcement of new Pixel smartphones and perhaps even a display-toting smart speaker.