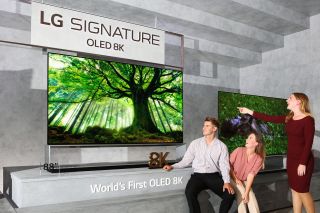 If you've got the cash, you'll be able to buy one of LG's first 8K TVs this month in the US, UK, Australia, Germany and France. But you'll need to have a big bank balance – the LG 88Z9 8K OLED TV will cost $29,997, at least for early adopters. After that it may cost even more.

If that's a bit too large for you, LG’s 75SM99 75-inch 8K NanoCell TV is marginally smaller, but likely to be equally pricey (we had no confirmed price at the time of writing). It uses LG's Full Array Local Dimming Pro technology optimised for 8K – precisely controlling the TV’s backlighting for deeper blacks and greater contrast.

For even greater convenience, both the LG 88Z9 and 75SM99 models will support Apple AirPlay 2 and HomeKit, and in some markets they will also have built-in versions of Google Assistant and Amazon Alexa voice control.