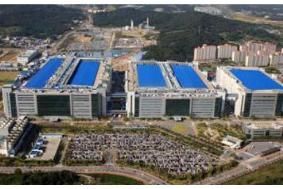 The company will be investing 484.6bn won, or almost £260m, at its Tangjeong plant, which currently makes LCD glass at the rate of 60,000 units a month. Once the new equipment is in place, which it's expected to be during 2010, that capacity could rise by up to 30,000 units a month.

Samsung also makes eighth-generation LCDs in its joint venture with Sony, S-LCD, that line having a capacity of some 140,000 units a month.