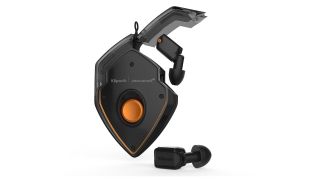 In case you didn’t know already, Klipsch is the new official headphone and portable audio partner of the McLaren Formula 1 team. And, to celebrate this partnership, both parties have teamed up to launch a new collection of headphones to cater for F1 and audio enthusiasts.

There are three new pairs in total, two pairs of true wireless earbuds and one pair of over-ear headphones, all of which include a splash of McLaren’s signature colour, Papaya Orange.

The Klipsch x McLaren T10 True Wireless in-ears (pictured above) are the flagship headphones of the family. They claim to be “significantly smaller and lighter than any other true wireless earphone available today”.

The internals of each earbud are based on the same balanced armature design used for the Award-winning Klipsch X10i in-ears. This is a ten-year-old model, but one that we were huge fans of back in the day. Let's hope they sound just as good.

Like all the new headphones, the Klipsch x McLaren T10s include voice assistant support and gesture control. They even boast an exclusive "turbo boost mode", which is claimed to improve audio quality. Naturally.

The case looks particularly interesting. Klipsch says the design has been inspired by McLaren’s design philosophy with “state-of-the-art magnetic doors”. We assume they'll do great in a wind tunnel, too.

Needless to say, these wireless earbuds aren’t cheap and they'll set you back a sizeable $999 when they launch in fall 2020.

The second pair of true wireless earbuds are the Klipsch x McLaren T5 Sport. These buds boast an eight-hour battery life and come with a wireless charging case that can provide an additional 24 hours.

They're a 'ruggedized', waterproof design (IP67 rated), with their case featuring a unique moisture removal system, just in case it gets doused in rainwater or perhaps drops of sweat.

Three sizes of ear wings are provided to get the optimum fit, plus a choice of Klipsch’s oval ear tips and memory foam alternatives. The T5 Sports will arrive in the fall and cost $249.

Besides the two pairs of earbuds, there's also a pair of over-ear headphones, the Klipsch x McLaren HP1.

They're a wireless, noise-cancelling design with “ultra-plush” memory foam earpads, a Transparency mode and 30-hour battery life. They're also going on sale in fall 2020 and will cost $549.

Rather bizarrely, Klipsch has also announced the T5 II True Wireless (launching summer 2020). This is the second-generation version of the T5 model mentioned above.

The new model features a revised earbud and nozzle design and a new signal boost antennae. The T5 IIs come with six pairs of eartips and a brushed metal case which can provide 24 hours of battery life.

We'll be going hands-on with the new models at CES 2020 next week.